April has marked an important month for major cryptocurrencies, many of which have consistently incurred spikes and price boosts during this time. 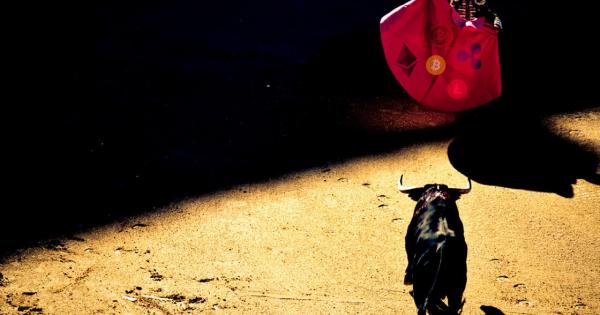 Photo by Giovanni Calia on Unsplash

April has marked an important month for major cryptocurrencies, many of which have consistently incurred spikes and price boosts during this time.

Bitcoin is currently trading for $9,600. This is a $100 jump from yesterday and nearly $500 beyond where it was trading at the beginning of the week.

FXStreet’s analyst, Ken Chigbo, says that the currency has incurred spikes – both large and small – over the past five weeks, ultimately rising from about $6,400 to its present state. That’s a 50 percent price boost in just over a month. A mega challenge lies ahead, however, in the form of $11,700, which Chigbo says will be the next big goal for Bitcoin if and when it spikes beyond the $10,000 mark.

Perhaps the biggest boost to both Bitcoin and its price this week comes from Goldman Sachs.

The financial investment firm made headlines after announcing it would develop a Bitcoin futures trading operation, thereby bringing further legitimacy and recognition to the crypto arena. Goldman is now the first Wall Street trading firm to take such action.

“That’s what a lot of banks do – follow what Goldman does. Most of these banks have heard about the numbers or seen the numbers that companies like Coinbase and Binance are putting up. There’s a real risk that some of those companies could overtake some of Wall Street’s biggest banks if they don’t get in the market.”

Like Bitcoin, Ethereum has also been going strong for the past five weeks. The currency has jumped over 100 percent since early April, and FXStreet’s analyst, Chigbo, attributes this to what he calls “greater buying pressure.” As the price continues to move above the trend lines, more investors are gradually showing interest.

However, he does mention that MACD indicators are still showing signs of a potential bear market, predominantly due to the SEC’s decision regarding Ethereum (scheduled for May 7) about whether to label it a security or a utility. Granted the currency falls into the former category, it could have massive repercussions not only on Ethereum but on several blockchain-based coins, many of which stem from initial coin offerings (ICOs).

Ripple (XRP) has enjoyed a particularly productive week, and is trading for about $0.90. Over the past four weeks, Ripple has jumped from $0.46 to over $0.90.

Unfortunately, the currency has reportedly hit some legal barricades, with the company now facing allegations of violating both state and federal security laws. A class action suit has been brought against the cryptocurrency venture, and it is unclear if this will have any lasting effects on Ripple’s price.

The five-week span mentioned for both Bitcoin and Ethereum seems to also apply to Bitcoin Cash, which according to Chigbo, has gained over 150 percent since early April. At press time, the currency is trading for over $1,500 – a solid spike from the $1,400 range it was enjoying at the time of our previous price article.

Recently, Bitcoin Cash was an indirect subject of a lawsuit against Bitcoin evangelist Roger Ver, who also owns Bitcoin.com. Those filing the suit alleged that Ver was intentionally blurring the lines between Bitcoin and its spin-off currency to sway investors, though monies gathered to fund the legal proceedings weren’t enough to cover the necessary fees. The suit has since been dropped and orchestrators are in the process of refunding donations.

At press time, Litecoin is trading for $169 – a solid jump from its $147 position covered during our last price piece. FXStreet’s analyst, John Isige, says that while LTC remains bullish in the long run, it has not managed to break past current selling pressure and could encounter resistance at $165, thus forcing it into a short-term bear pattern.

At the same time, LTC may encounter higher usage in the coming weeks now that Reddit has reversed past its Bitcoin ban. Executives say they are ready to instill Bitcoin, Ethereum and Litecoin payments in the future now that its partner Coinbase has migrated to a new platform.

The current market cap sits at $456 billion – about $2 billion more than where we stood during our previous article as major cryptocurrencies remain in the green. Despite positive sentiment, investors are advised to remain cautious and understand that volatility is an ongoing concern in the crypto arena. In other words, don’t invest what you don’t have or can’t afford to lose.