Crypto is here: Total market cap hits $1 trillion for the first time ever

As per CoinMarketCap data, the cryptocurrency market has officially passed the magical $1 trillion milestone. 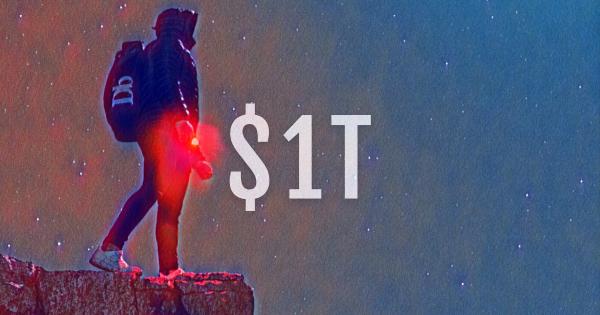 As per CoinMarketCap data, the cryptocurrency market has officially passed the magical $1 trillion milestone. CoinGecko, another data aggregator, recently made a similar confirmation.

This means that all cryptocurrencies in existence are currently valued at $1 trillion in aggregate for the first time.

A majority of this market capitalization, $670 billion in fact, currently consists of Bitcoin.

Another large portion is allocated to Ethereum, whose $135 billion circulating supply has recently made it one of the world’s top 100 assets by market capitalization.

The rest consists of altcoins, from large names such as Tether’s USDT to smaller altcoins, like those in the decentralized finance space.

Do we deserve it?

When Bitcoin, Ethereum, and especially altcoins were erupting higher during 2017’s bull run, many were quick to ask if these valuations were truly deserved.

Vitalik Buterin, the founder of Ethereum, shared this poignant tweet in 2017, commenting on this.

So total cryptocoin market cap just hit $0.5T today. But have we *earned* it?

With the cryptocurrency market capitalization at double what it was at this time, many say that it is doubly deserved.

On the front of Bitcoin, the leading cryptocurrency has seen strong institutional adoption, with many on Wall Street not admitting that the cryptocurrency is a viable investment and a likely alternative to gold. Investors that have acknowledged this over recent months include Paul Tudor Jones, Ray Dalio, Stan Druckenmiller, and Rick Rieder. Each of these individuals manage multi-billion-dollar portfolios.

2017’s rally was predicated on pure promises, with projects reaching multi-billion-dollar valuations on pure speculation and strong marketing that convinced throngs of retail investors to buy.

This rally has been predicated on fundamentals and the delivery of products.

Ethereum has seen a large influx of usage in recent months, as evidenced by the growth seen in decentralized finance platforms.