The aggregated crypto markets have been subjected to the volatility experienced by Bitcoin over the past several days, which has primarily favored bears. The recent market-wide downswing has led altcoins like Bitcoin Cash to shed some of their recent gains, although their market structures still remain firmly bullish.

Analysts are now noting that Bitcoin Cash has been leading the aggregated crypto markets, which could signal that where it trends in the near-term will offer insight into where other major altcoins head next.

With this in mind, it does appear to be a strong possibility that the markets could be on the cusp of a sizeable rally, as Bitcoin Cash is showing some signs of bullishness at the moment.

Bitcoin Cash May Be Frontrunning the Aggregated Altcoin Market

Currently, Bitcoin Cash is trading up 2% at its current price of $341, which marks a decent climb from daily lows of $325, and only a slight drop from highs of $350.

Over a one-week period it is clear that the crypto is firmly being controlled by bulls, as it is up from lows of $275. Its rise from these lows has come about against a backdrop of bullishness seen by Bitcoin and other major altcoins, but BCH has been generally outperforming the markets.

One interesting factor that should be noted is that BCH appears to be frontrunning the aggregated crypto markets, meaning that altcoin traders can get hints as to where other cryptos will trend based on Bitcoin Cash’s price action.

Is BCH Signaling That the Markets Are About to Rally?

Bitcoin Cash has also formed a striking correlation to Bitcoin SV throughout 2020, with the two cryptocurrencies incurring similar price action – albeit seeing different magnitudes of gains.

“I wonder why $BCH and $BSV have the exact same chart. It’s almost creepy how similar these movements are. Perfectly timed,” DonAlt, another popular analyst, explained. 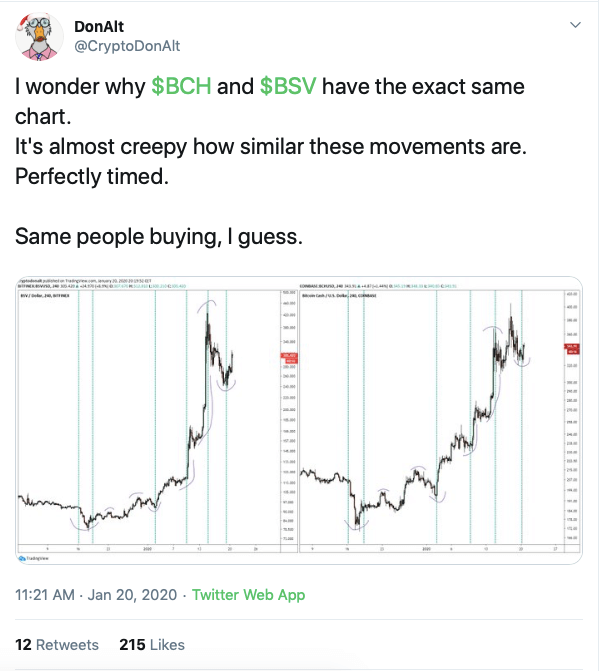 Because Bitcoin SV is trading up 9% currently and is attempting to spark yet another parabolic upswing, it is a strong possibility that BCH will do the same and drag the altcoin markets up with it.