The battle to save proof of work coins like Bitcoin from being banned is not over in Europe. This week is a critical moment for the legislation that looked to ban proof of work mining. 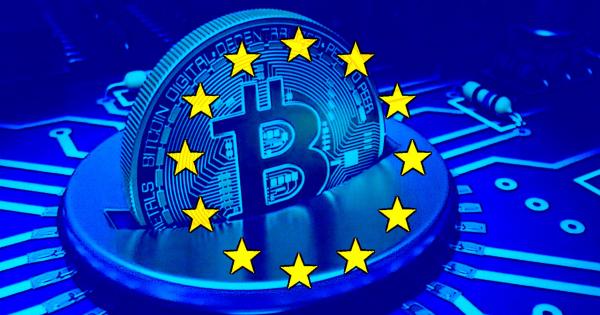 The leader MP on the Markets in Crypto Assets report for the European Parliament, Stefan Berger, has just released the timeline for the next stage of the democratic process for crypto regulation in Europe. The legislation is currently going through trilogues, a part of the parliamentary procedure that takes the form of informal conversations between three parties, the committee, the council and the rapporteur (lead MP).

The ERDi (European Digital Rights) organisation declared trialogues as a “non-democratic, non-accountable and non-transparent process”. Unfortunately, for the crypto world, this process will ultimately define the fate of proof of work blockchains in Europe.

Bitcoin ban could be back on the table

Berger explained how this week would prove vital for proof of work coins like BTC as his negotiating mandate can be challenged if just 71 MEPs vote against it on Wednesday. The current form of the report does not include the proof of work ban that made its way into an earlier version.

Amendments that would have allowed cryptocurrencies deemed ‘unsustainable’ were also thrown out last week. This left a version of the report that contained no language that could be construed as attempting to ban coins like Bitcoin.

However, if the mandate is thrown out at this stage, it is then sent to the plenary (a session of EU Parliament), where a rejection in April would send the MiCA report back to the plenary in its entirety.

According to Berger, if this happens, the report may be subject to further amendments, which could include a possible proof of work ban led by the S&D and Greens. Therefore, this week is vital to signpost the potential future of crypto and, more specifically, crypto mining in Europe. There is a need for clear definitions between proof of work crypto mining services and services that use proof of work blockchains. Previous versions of the report did not differentiate between the two, meaning that exchanges would have to delist proof of work coins like Bitcoin.

Why Bitcoin should not be banned

Personally, the debate about mining efficiency and the sustainability of Bitcoin mining, in particular, is tired. Michael Saylor recently said that “money is energy”, which makes a lot of sense. Energy is the one thing in this universe that cannot be created or destroyed, so all trades and transactions must involve energy transfer.

This energy transfer is transparent and linear; you plug in a miner, drawdown electricity, and eventually get a block reward. However, whilst the transparency and direct correlation between energy and proof of work crypto should be heralded for its efficiency, it is instead considered wasteful and unsustainable.

Outside of crypto, no other form of money is as efficient as Bitcoin. You don’t need an office full of workers commuting to work every day. No heating or energy bill is required for any activities not directly related to generating revenue.

Bitcoin has no supply chain requiring delivery lorries. No inefficient machines are creating toxic waste as a byproduct of the company’s manufacturing process. And you certainly do not need to calculate the carbon footprint of the private jet that the CEO uses to fly across the country for their next board meeting. The equipment used for Bitcoin turns electricity into money in the purest form possible.

In fact, in July last year, Forbes reported how “Bitcoin mining uses a higher mix of sustainable energy than any major country or industry.” If we talk about regulation and the sustainability of proof of work mining, we should discuss how we can help crypto mining companies convert to 100% renewable energy.

The carrot is mightier than the stick. We should do this, not because crypto mining is wasteful, but because it is not. Using 100% renewable energy to mine crypto is 100% efficient for the monetary system.

If you have any thoughts or insights into either EU crypto regulation or crypto mining in Europe, please reach out via Twitter or email. Both are linked above.