Why did the EU ditch its plans to ban Bitcoin mining? Samuel Wan · 4 months ago · 2 min read
Germany› Bitcoin › Legal

Why did the EU ditch its plans to ban Bitcoin mining?

Further investigations show a Proof-of-Work mining ban was never on the agenda, much to the satisfaction of Bitcoin advocates. 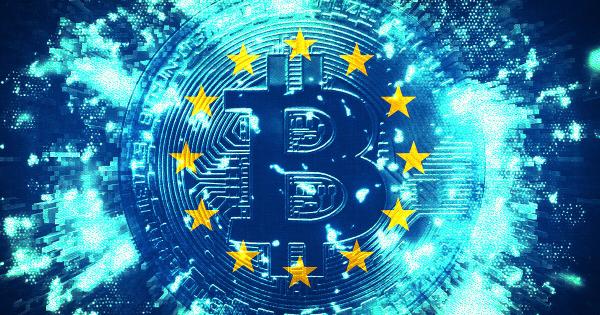 European Union regulators have removed a section from proposed legislation that may have banned Bitcoin mining in the region.

In the run-up to the decision, commentators had blasted lawmakers on the grounds of stifling innovation. Bitcoiner Dennis Porter made this point in a recent tweet, saying:

“Apparently the EU wants to ban #Bitcoin mining because they really don’t want the next 100 years of energy innovation to happen there.”

However, the issue highlights the multifaceted, sometimes conflicting, objectives faced by regulators. After all, regardless of where you stand on Proof-of-Work (PoW) mining, there’s little doubt it has an impact on energy resources.

There are two issues to consider when it comes to Bitcoin mining: the energy source and the level of consumption.

As alleged by Elon Musk last May, the majority source for miners comes from highly polluting fossil fuels. Then again, this is disputed by some researchers who say the Bitcoin network is powered by up to 75% renewable sources.

Regarding consumption, Cambridge University estimates Bitcoin consumes 131.26 TWh of electricity over a year. For perspective, this is more than the country of Ukraine, which has a population of 43 million (124.5 TWh p/a) but less than Egypt, at 149.1 TWh p/a.

Critics liken Bitcoin to a ravenous monster in that the bigger it gets, the more electricity it will consume. They foresee a time when blackouts occur as electricity infrastructures struggle to cope with demand. For that reason, curbs on PoW mining are necessary.

Power blackouts due to competing demands have already happened in Iran, and more recently, in Kazakhstan.

MicroStrategy CEO Michael Saylor points out the relationship isn’t as linear as people think. In response to the controversy triggered by Musk, he countered by saying energy efficiency improves as the network scales.

The estimated electricity consumption per https://t.co/Lj4SMIkLS8 YTD increased 40% during the same period that the network grew 100% in assets, meaning that energy efficiency dramatically improved during this time period. #Bitcoin is becoming less energy intensive as it scales.

However, Saylor’s point didn’t address raw consumption, which will still increase as the network grows. As a result, blackouts may become more frequent unless energy production increases.

Was the EU going to ban Proof-of-Work mining?

Some had interpreted a section in the proposed Markets in Crypto Assets (MiCA) bill as conducive to a ban on PoW.

But the purpose of MiCa is to further enable and support the potential of digital finance in terms of innovation and competition. It was never a direct attempt to ban PoW mining.

Member of European Parliament Stefan Berger, who led the bill, said although paragraph 61 (9c) of the bill may have been interpreted as a ban on PoW mining, the purpose was not to restrict Bitcoin or any PoW token.

“it is central for me that the MiCA Directive is not misinterpreted as a de facto bitcoin ban.”

To avoid any doubt on the matter, Berger has since moved to pull that section from the proposed bill, which he confirmed via Twitter on Tuesday.

Lawmakers will vote on MiCA at the end of this month or early April. If approved, it will provide a regulatory framework for digital assets in the EU.