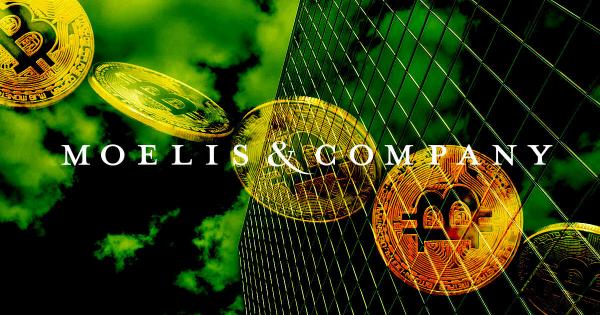 Moelis & Co.’s co-founder John Momtazee is appointed to oversee the effort. A longtime venture investor Lou Kerner, the founder of CryptoOracle Collective, has been appointed as a senior adviser to the group.

“The presence of Moelis as a leading advisor in this space is an important development for the long-term growth of blockchain technology. Our combined advisory capabilities, longstanding client relationships and extensive blockchain expertise will help drive the adoption of this transformative technology.”

In addition to its founders, the staff is also interested in crypto, with 30% of staff having crypto wallets, juniors being the majority, Bloomberg News reported, citing an interview with Momtazee.

Moelis & Co. believes that technological investment is a significant factor that shapes the business landscape. In this respect, the company sees immense potential in crypto and the grandness of its advisory impact.

Momtazee said in a July 25 press statement that more than 50 unicorns have appeared, and nearly $20 billion of capital was raised for blockchain companies last year. The potential of this sphere is evident by these numbers only. He added that blockchain technology solves many problems and that we’re still in the early ages of its revolution.

The Moelis & Co. co-founder said he trusted the sector and dismissed the negative sentiment due to the bear market. According to Bloomberg, Moelis Momtazee said in an interview.:

“We love the timing. We think that to pile in on good days and say, ‘Here we are, ready to help,’ feels less genuine than when there’s a challenge. Any disruptive technology is going to have volatility.”

Moelis has already been advising crypto projects, including Voyager Digital, which had to file for bankruptcy due to the Three Arrows Capital collapse.

Momtazee likened the transformative power of crypto to the internet in the late 90s. Like the internet, he said, blockchain carries long-term potential, which creates the need for proper advising.

Moelis, on the other hand, said the crypto space would grow further, and companies would keep making more significant deals. He said the arrangements made now are not “big-ticket” yet, much like the early days of the internet where companies made small deals.