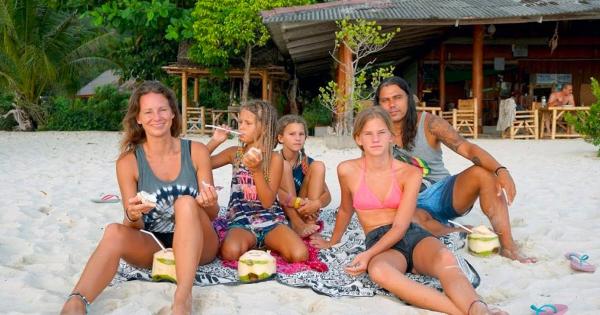 Known as the Bitcoin family, the Taihuttus made news back in 2017 when they liquidated all of their assets for Bitcoin. Three years later, CNBC got back in touch with the nomad family to find out that they’re still accumulating BTC and buying every dip they can.

A family that’s been selling everything for Bitcoin since 2017

Holding Bitcoin bags has been touted as somewhat of a lifestyle by the crypto community, but few have embraced it as much as the Taihuttus, a Dutch family that sold everything they had for BTC back in 2017.

Didi Taihuttu made news three years ago when he liquidated all of his family’s assets—including a profitable business and a 2,500-square-foot house—and traded it all in for Bitcoin.

“We stepped into bitcoin, because we wanted to change our lives,” the 42-year-old father of three told CNBC.

Since 2017, the family has been living a nomadic lifestyle, visiting 40 countries while staying true to their goal of not having much in terms of personal possessions.

While this might seem extreme to many, Taihuttu doesn’t seem to have a problem hodling. He told CNBC that the bulk of his BTC was bought in early 2017, when it was trading for around $900.

In it for the long ride

Bitcoin’s fall from its $20,000 ATH several months later hasn’t deterred Taihuttu from investing in the cryptocurrency. The insanely inflated crypto bubble began bursting at the end of 2017, with Bitcoin dropping to $3,000 in early 2018.

However, Taihuttu kept his outlook positive and decided to double down on his investment:

“When bitcoin dipped, we started to buy more.”

Now a crypto veteran, Taihuttu holds an extremely bullish view when it comes to the crypto market. When asked whether he believes Bitcoin’s latest rally could be another bubble, he said that he didn’t believe that demand for Bitcoin is going down as it did in 2017. He believes that the market is currently headed for a supply crisis, CNBC reported, adding that there are clear differences between the two rallies.

“When PayPal starts to sell bitcoin to its 350 million users, they also need to buy the bitcoin somewhere,” said Taihuttu. “There will be a huge supply crisis, because there won’t be enough new bitcoins mined everyday to fulfill the need by huge companies.”

The upcoming fifth Anti-Money Laundering Directive (AMLD5) within the European Union (EU) has already spelled the end for smaller crypto firms on the continent.

German Tourism Board Allows Crypto Payments For Its Services

In a move to promote innovation within an otherwise low-lying industry, the German National Tourism Board (GNTB) has recently announced the incorporation of crypto assets into its framework for regular service payments.