Colorado residents can now pay their taxes in crypto

Governor Polis has revealed that Colorado residents would soon be able to pay state bills with digital assets. 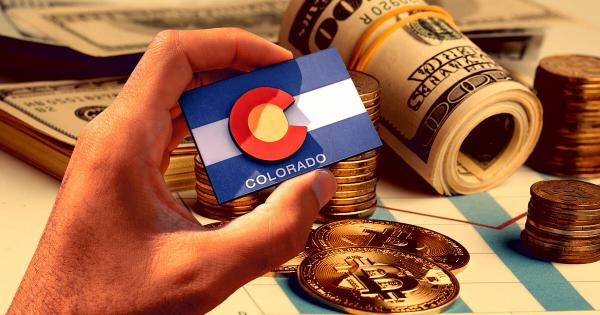 As a sign of the mainstream public’s continued adoption of digital assets, Governor Jared Polis of Colorado, a state in the western part of the United States, disclosed that they would start accepting cryptocurrencies like Bitcoin and Ethereum as a payment option for taxes in the state.

According to Governor Polis, the state could also begin accepting crypto payments for other state-related fees. This means that Colorado residents could pay for their driver’s license or other state bills using crypto.

The governor, however, noted that this move does not necessarily mean that the state will have direct exposure to these assets. Per his statement, Colorado would be partnering with a crypto firm to help it accept and convert the crypto payments.

“Our budget is still in dollars, our expenditures are still in dollars, and, of course, we don’t want to take the speculative risk of holding crypto, so we will be having a transactional layer there. It will be entering our systems as dollars.”

While many crypto enthusiasts might see this as a welcome development, it should be noted that we could not find any official paperwork on this move.

Colorado is one of the earliest states in the United States to embrace blockchain-enabled solutions for some of the issues bedeviling it. Governor Polis highlighted that Denver, a major city in the state, used blockchain technology for its overseas ballot in an election.

Aside from this, the Colorado governor was one of the earliest politicians in the United States to accept Bitcoin donations for his political campaigns.

The crypto adoption race in the United States is heating up as several states and cities are making plans and policies to attract crypto enthusiasts to their states.

Already, states like Arizona, Tennessee, Texas, and Wyoming have made several pro-crypto moves in their bid to make their state a crypto hub.

Apart from the states, mayors of the cities of Miami and New York have also made strategic decisions to bring crypto to the limelight in their cities. The mayors of these cities have, at different times, received their salaries in Bitcoin.

However, despite all of the positive moves being made by the states and cities, the country’s federal government has yet to make a concrete effort towards adopting or regulating digital currencies.

The US federal reserve recently released a report on its much-touted works on the digital dollar. The report, however, failed to give a tentative answer if the body was going to issue a national digital currency or not.

Is Zero-Knowledge Proof the next big thing in crypto?

Banxa to layoff 30% of workforce to shelter the “crypto winter”