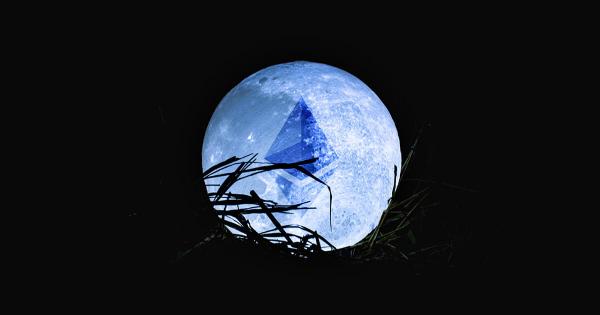 Photo by Alexandra Vozvyshaeva on Unsplash

Although the second-largest cryptocurrency by market cap has been largely underperforming Bitcoin and flashing signs of near-term weakness, it is important to note that this has not been emblematic of ETH’s fundamental forte.

One data metric that makes it incredibly clear as to just how strong the cryptocurrency truly is the skyrocketing usage rates that ETH has seen in 2020.

It is a possibility that this will ultimately translate into positive price action, potentially helping trigger an explosive uptrend that leads it as high as $500 in the coming six to twelve months – according to one analyst.

Ethereum has been closely tracking Bitcoin’s price action as of late, struggling to garner any independent momentum.

The cryptocurrency did show some signs of strength earlier this week when it rallied up to $255, but it faced some strong resistance here that has since sparked a tempered downtrend.

At the time of writing, the cryptocurrency is trading down just over two percent at its current price of $237. Bitcoin has seen a similar decline today.

This tempered technical weakness may not last for too much longer, however, as ETH has never been stronger from a fundamental perspective.

Rafael Schultze-Kraft – a data scientist and the co-founder of analytics platform Glassnode – spoke about the usage rates Ethereum has seen in 2020, noting that addresses with heavy transactional volume have been seeing unprecedented growth.

Despite not translating into any bullishness in the short-term, this fundamental strength could ultimately provide ETH with a serious price boost.

Per a previous report from CryptoSlate, prominent gold bull Dan Tapiero recently explained that he believes Ethereum is on the cusp of seeing an explosive uptrend towards $500 in the year ahead.

“Chart of Ethereum on verge of explosive upmove. Are there any upcoming potential catalysts? Move up through 300 projects to 500 minimum in coming 6-12 months.”

If Ethereum is to see any type of intense parabolic rally in the months ahead, its newfound fundamental strength could help provide this movement with sustainability.

The imminent launch of ETH 2.0 in Q3 of this year could also be an event that triggers this potential uptrend.

Dan is a veteran Global Macro investor and a co-founder of GBI. Learn More