The recent Uniswap token (UNI) launch has excited the crypto industry, sending shockwaves throughout the market and even catalyzing an Ethereum upswing. 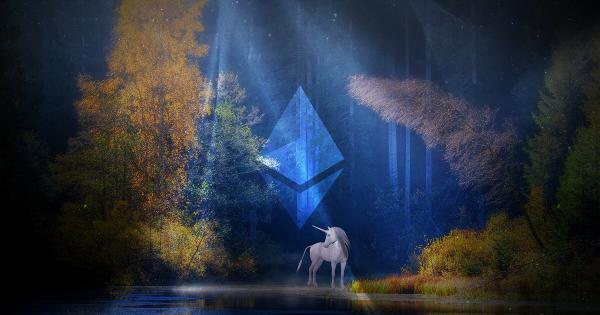 The recent Uniswap token (UNI) launch has excited the crypto industry, sending shockwaves throughout the market and even catalyzing an Ethereum upswing.

This was an unprecedented token introduction, as it granted all the platforms’ users with a minimum of 400 UNI worth over $1,300 at the time of writing.

Investors and users have been speculating about the imminent release of a Uniswap token for weeks. However, little concrete information was available until the platform released a blog post detailing the token release yesterday.

In this post, the decentralized AMM outlined the distribution curve of the token, and the governance rights holders are entitled to. They also announced that UNI rewards would be spread across four pools for the next 60 days for liquidity providers.

The launch of the token kindled an Ethereum uptrend that is showing few signs of slowing down, leading one analyst to forecast further gains in the near-term.

The token, which has a total supply of one billion, but a circulating supply of 65 million at the present moment, saw an extremely successful launch, despite the widespread distribution.

It even caused Ethereum gas fees to rocket higher, at one point reaching an average gwei of 900.

After dropping below $1.00 during its initial listing, the cryptocurrency eventually surged up towards $4.00.

In the time since, its price has settled within the mid-$3.00 region, with its stability in the face of relentless sell pressure from those who received the 400 airdropped tokens not outweighing the buy-side pressure.

In addition to causing Ethereum gas prices to spike, the Uniswap token launch also caused ETH’s price to appreciate, surging from pre-launch lows of around $360 to highs of $388.

Currently, Ethereum is trading just below these highs at its current price of $387.

Luke Martin, a respected analyst, explained that he expects this ongoing ETH upswing to extend a bit further.

“One of the most interesting parts about this UNI launch is how it *might* have sparked some life back into $ETH. The launch announcement last night marked the low for price this week. Up about 7% in less than 24hrs. I would not be surprised to see it jump another 10-15%”

This is an interesting sentiment, as it indicates that UNI’s launch is driving demand to Ethereum on possibly two fronts.

Either it is causing investors to buy ETH to then acquire UNI tokens, or it is sparking an ETH accumulation trend amongst users looking to stake tokens in the various liquidity pools that provide UNI incentives.

The Uniswap token launch appears to have reinvigorated the markets – and the DeFi sector in particular – which could mean that another phase of intense upside for altcoins is imminent.