The market saw a sudden drop this morning leading to millions of dollars in ‘liquidations.’ 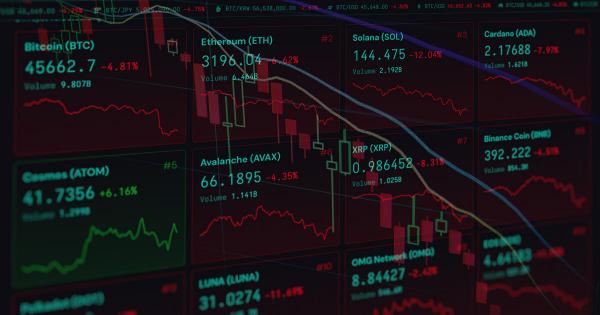 Crypto traders were in for a tough Monday morning as they woke up to double-digit percentage losses across the market. Large-cap altcoins like Solana, XRP, and Cardano shedded millions of dollars from their respective market caps, while Bitcoin and Ethereum lost 6% and 7% at press time respectively.

Data from analytics tool Bybt shows $620 million was liquidated in the past 24 hours alone. Of those, Bitcoin accounted for over $220 million in liquidations, followed by Ethereum at $126 million.

A staggering 91% of all liquidated traders were ‘long’ the market—meaning they had put on positions betting on higher asset prices. Just $52 million worth of shorts were, on the other hand, liquidated.

Futures powerhouse Bybit—known for its degen traders—oversaw $249 million with of liquidations, the most among all other crypto exchanges. Binance, OKEx, and FTX followed with $135 million, $117 million, and $76 million.

139,753 traders were liquidated in all, with the largest single liquidation order occurring on Bybit—Bitcoin trade valued at $7.17 million. At press time, Bitcoin seems to have stabilized at the $45,500 price level. But as is with all things crypto, it may not signal the end of the dip.