A bizare interview by Gensler leaves viewers wondering what is going on with the SEC. 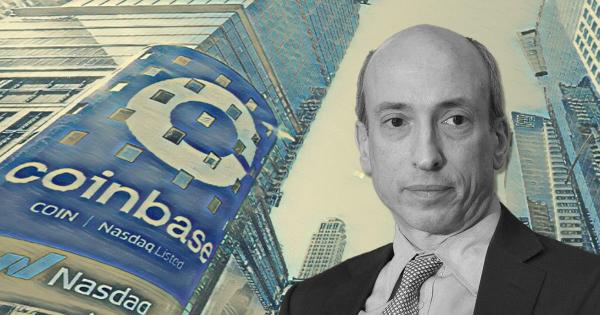 Armstrong’s allegations were in relation to the launch of Coinbase Lend, a yield earning program paying 4% on USDC deposits. Last Friday, the firm announced that they have decided to shelve the product as they “continue to seek regulatory clarity.”

But Gensler refused to directly address the allegations, instead choosing to speak in generalities. This response has only fueled speculation of hidden agendas at the SEC.

What’s the story, according to Coinbase?

Two weeks ago, the Coinbase boss posted a series of tweets describing his run-in with SEC over its Lend program.

As a heads up to regulators, he said they reached out to the SEC to get feedback on their up-and-coming lending feature. However, the response they received was wholly unexpected.

The SEC told Coinbase the Lend program is a security, and they were also refused an explanation when they sought clarity. The SEC subsequently subpoenaed records, interviewed staff, and threatened legal action if they went ahead with launching the program.

“They responded by telling us this lend feature is a security. Ok – seems strange, how can lending be a security? So we ask the SEC to help us understand and share their view. We always make an effort to work proactively with regulators, and keep an open mind.“

The SEC is already in a pickle with the ongoing Ripple lawsuit. Some say the regulator is guilty of picking winners and losers and “regulating by enforcement.”

In addressing the issues raised by Armstrong, Gensler did not answer why the SEC responded the way they did. Instead, he gave a background on how the securities laws (from the 1930s) came into being.

When pressed on Armstrong’s claims that the SEC refused to provide clarity and help understand their view, Gensler, again, didn’t answer the question. Rather, he responded by saying that the SEC is open to working with firms to register securities in a generic sense.

“Let me take it more to the generic, if you’d understand why I’m not going to get into any one company or one token.”

Gensler’s appointment as SEC Chair in April was hailed as a win for crypto, in that, in light of his academic background in teaching blockchain, he would at least be knowledgeable of the space.

Fast forward to now, and that halo effect has long since vanished for obvious reasons.

What’s more, considering the bizarre behavior coming from the SEC, some speculate there is more going on under the surface.

@TheCryptoLark called the SEC “part of the global banking mafia,” which would go some way in explaining their actions concerning crypto.