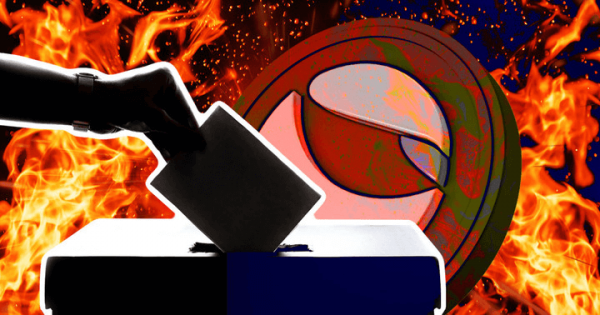 The second proposal to burn the remaining UST tokens held in the community pool has reached a quorum and will likely pass at 9 pm GMT on May 26.

The initiative to burn UST was previously passed earlier this month but failed to execute due to technical issues with the proposal. The new proposal states that the “previous proposal tried to withdraw more from the community pool than was available and hence the execution failed.”

Now amended, the proposal will burn 1,006,733,194 UST tokens while the community pool currently contains 1.01 billion, meaning there should be a buffer of around 3 million tokens.

The reduction will amount to around 8% of the total supply of UST and may help bring it closer to its original dollar peg. UST is currently trading around $0.10 per token, down 90% from its designed price.

Community pool to be included in LUNA2

The proposal will pass 1 hour and 13 minutes after the snapshot is taken for the new LUNA chain meaning the community pool will be included in the distribution.

The community pool will receive 30% of new tokens, 3x the amount allocated for “pre-attack” UST holders, who will receive 10%. Given the controversy around the failure of the initial proposal, the timing has raised concerns in the community.

So, is this another shenanigan? They burn the USTC, but not before quietly pocketing the corresponding UST airdrop in this fishy way? In the light of this, maybe the failure of the first burn proposal wasn't so much due to incompetence after all..

The revival proposal, which passed with just 65% of the votes, was amended mid vote without requiring a new submission. However, the initial proposal to burn UST was not amended and subsequently failed and mandating a new vote.

Those who allege that there is something untoward behind the scenes with the Terra ecosystem may point to this timing as further evidence of their claims.

The Terra ecosystem is undoubtedly struggling to find any form of stability. The current daily staking return on Terra Station shows a 66% daily return or 269,431% annually.

The results are likely bugged due to the massive inflation that has impacted LUNA since the UST de-pegging event. Along with numerous issues around recent governance votes, the future of what will now be known as LUNC is under question.