Technology pioneer John McAfee recently announced the end of his involvement with initial coin offerings (ICOs) but is far from done with the world of distributed ledger technology. 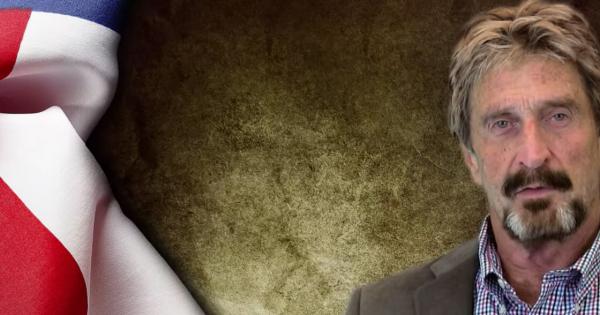 Technology pioneer John McAfee recently announced the end of his involvement with initial coin offerings (ICOs) but is far from done with the world of distributed ledger technology. After revealing his intention to run for 2020 US president, McAfee declared he plans to cease corruption, introduce blockchain-based polling, and implement universal medical care upon his election.

McAfee’s statements regarding the future of America, made across social media over the last week, outline an entirely blockchain-based vision independent from the manipulation of monolithic political and economic structures.

McAfee No Longer Working With ICOs Due to “SEC Threats”

McAfee recently declared war on the US Securities and Exchange Commission, challenging SEC chairman Jay Clayton to a live debate on national television and vehemently stated he will “ will fight with every last breath” to ensure the SEC overreach will “not stand” in light of Clayton’s stance on ICOs.

A tweet posted by the security expert and blockchain proponent states that ICOs are no longer on the table — all those doing ICOs, states McAfee, are destined to be arrested in an unjust, but very real, regulatory environment.

Due to SEC threats, I am no longer working with ICOs nor am I recommending them, and those doing ICOs can all look forward to arrest. It is unjust but it is reality. I am writing an article on an equivalent alternative to ICOs which the SEC cannot touch. Please have Patience.

McAfee, however, won’t take unjust SEC rulings lying down. The establishment of McAfee’s political party, the Cyber Party, will see McAfee run for the office in the 2020 US presidential election.

America, states McAfee, has fallen behind in the race to become the first major cyber warfare country. As a speaker at the 2015 TechCrunch Disrupt, McAfee predicted the growing technological ineptitude of government officials:

“Our government is technologically illiterate … we are living in a cyber age where the next war won’t be waged with bombs and bullets, it’s going to be a cyber war … all of our money is going to disappear, and all of our records are going to be jumbled.”

The Cyber Party will operate on the core tenets of privacy, freedom, and technology, with McAfee stating that he will include as much of the blockchain world as possible into the political process. The future political architecture of the United States — if the McAfee revolution succeeds — will be built upon the foundation of blockchain technology.

The healthcare industry is a key target of the McAfee presidential campaign, with McAfee openly chides Obamacare and the current government’s solutions in the US:

“Look at the massive amounts of money time and effort that was put into Obamacare, and then the same amount of effort put into unwinding it. And yet, with the blockchain — with Docademic — we have free medical care for everybody.”

Docademic appears to be McAfee’s healthcare platform of choice for his presidential campaign. Using a “Medical Token Currency,” Docademic plans to make it possible to deliver virtually free healthcare through the exchange of anonymized data transparently stored on the blockchain:

Cryptoslate connected with Docademic Co-Founder and CEO Charles Nader to discuss the McAfee campaign and the Docademic approach to healthcare:

John McAfee has recently stated that, if elected to the office of US President, he’ll integrate Docademic as his healthcare platform. Would the Docademic platform be ready to stand alongside McAfee in 2020?

“Definitely. We are working hard to expand to all parts of the world and although this is a big task we’re on track to do it. By leveraging technologies such as artificial intelligence that help us serve masses in the millions we can now confidently say that we could serve the US population and are honored to have Mr. McAfee consider us as a solution to some of the US’s most pressing healthcare problems.”

What is the biggest issue facing the healthcare industry today, and how does Docademic plan on tackling it?

“We believe that there are two fundamental issues detaining the universalizarían of medicine worldwide. One is universal access to healthcare, and second is the correct sharing of medical information. Docademic offers solutions to these issues through the invention of innovative business models that offer access to basic healthcare at no cost to users as well as the leveraging of Blockchain technology to share and store and analyze, with artificial intelligence, medical information from patients and the medical community.”

Healthcare isn’t the only element of governance McAfee plans to bring onto the blockchain. Public opinion will be made verifiable, transparent, and immutable through the use of distributed ledger technology via public opinion poll platform ClearPoll:

“ClearPoll enables free speech and immutable voices that will force government entities to acknowledge corruption … it allows anybody with a smartphone to vote on any issue and have that vote connected to the blockchain and verified by all. It allows for freedom of expression free from manipulation of the media and political parties.”

ClearPoll director and co-founder Daniel Abela highlighted the importance of blockchain-based polls in the current political ecosystem in an interview with CryptoSlate:

How does ClearPoll feel about working alongside a potential McAfee presidency?

“We’re excited to have John McAfee join our platform during his 2020 US Presidential campaign. He understands the true value of ClearPoll and sees the benefit to hosting opinion polls on the blockchain.”

“In recent times, polls have been manipulated and censored by the media. John will benefit greatly from the transparency and accessibility of the polls he creates as well as the powerful poll result analytics included.”

Why bring polling and public opinion onto the blockchain?

“ClearPoll has tremendous ability to change the way we record and share real public opinion. All users can create polls on topics they care about, and vote instantly, having confidence that their vote is secured on the blockchain. ClearPoll truly gives all users an equal voice and we expect rapid mainstream adoption and integration once we launch.”

When can we expect to see a live iteration of the ClearPoll platform?

“ClearPoll launches in full on August 31. All of the features we’ve planned — including user rewards, social feed, and sponsored polls — will be included in the launch.”

While a third party candidate has never won a US presidential election since the advent of the Two-Party System in 1828, McAfee is confident of the chances of the Cyber Party upsetting the balance of power:

“Statistically, it’s a perfect chance for me. Someone said ‘well, there hasn’t’ been an American president with a beard for 100 years’ — that’s great! You’re playing roulette, and black has come up 25 times in a row — red will have to come up eventually … it doesn’t matter that no third party candidate has won before.

Will we see a United States in which blockchain-based McAfee Redemption Units are the official state currency, with Bitcoin valued at $500,000? Only time will tell.

No hoax. The "McAfee Redemption Unit" is real and coming in 26 days. The graphic is low res – don't want to give much away yet. Printed on currency paper, holographs on both sides, serialized, linked to the blockchain, redeemable, convertible, collectiblehttps://t.co/ySUwkDuW7s pic.twitter.com/75xTje39X8

McAfee’s presidential candidacy, however, appears to have drawn negative attention from at least one malignant party — the security expert’s recent absence from social media was explained earlier today by a tweet announcing that a failed poisoning attempt kept McAfee from posting:

I apologize for my three day absence but I was unconscious for two days at the Vidant Medical Center in North Carolina and just woke up. My enemies maged to spike something that i ingested. However, I am more difficult to kill than anyone can possibly imagine. I am back.

This isn’t the first time McAfee has been targeted by would-be assassins — his Belizian jungle compound was stormed, states McAfee, in May 2012 by 42 paramilitary soldiers, launching war between McAfee and the Belizian government that culminated in the death of his neighbor in October 2012 during a botched assassination attempt.

McAfee, however, is — in his own words — “More difficult to kill than anyone can possibly imagine.” And he’s back.

My wife @theemrsmcafee and I with a message to my incompetent enemies pic.twitter.com/s7rT105OWy