Billionaire Peter Thiel made headlines after questioning why Bitcoin was brought up in the first place. 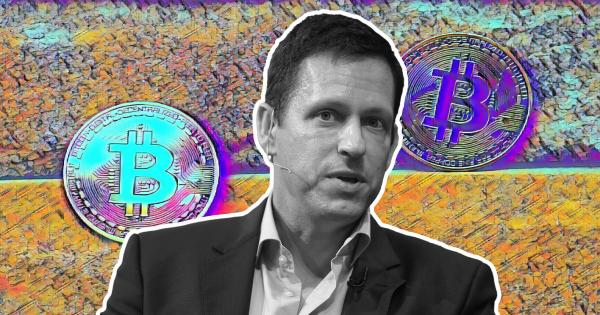 Satoshi Nakamoto launched Bitcoin in January 2009 during the global financial crisis. The person or group of people who developed the pioneer cryptocurrency left a message in the Genesis Block that hints at the motive for creating the digital asset.

The “Chancellor on brink of second bailout for banks,” reads the timestamp.

It is widely believed that whoever Nakamoto was, he had a disdain for the traditional finance system and showed uneasiness at placing trust in fractional reserve banking.

According to Nakamoto, “banks must be trusted to hold our money and transfer it electronically, but they lend it out in waves of credit bubbles with barely a fraction in reserve. We have to trust them with our privacy, trust them not to let identity thieves drain our accounts. Their massive overhead costs make micropayments impossible.”

Although Bitcoin seems to have been created as the first deflationary asset to combat the global financial system’s pitfalls, billionaire Peter Thiel believes that BTC has a deeper agenda.

The co-founder of PayPal suggested that the flagship cryptocurrency could be a “Chinese financial weapon” and urged the US government to consider tighter regulations.

“I do wonder whether at this point, Bitcoin should also be thought [of] in part as a Chinese financial weapon against the US. It threatens fiat money, but it especially threatens the US dollar. “[If] China is long Bitcoin, perhaps from a geopolitical perspective, the US should be asking some tougher questions about exactly how that works,” said Thiel.

The venture capitalist remarks created commotion among cryptocurrency enthusiasts, given his investment in the space.

Anthony Pompliano believes that Thiel was taking out of context and was not taking an “anti-bitcoin stance.” Instead, the founder of Morgan Creek Digital maintains that “he’s saying: ‘listen there is a global competition happening here.'”

Whether Thiel tried to undermine Bitcoin or not, it is irrelevant when considering that BTC could replace gold reserve assets.

A recent Bloomberg report argues Bitcoin has a high chance of migrating into traditional investment portfolios. Tesla’s decision to allocate some of its wealth into the bellwether cryptocurrency could create a ripple effect encouraging other firms to diversify into the digital asset.

“Most indicators point to an accelerating pace of Bitcoin replacing the metal as a store of value in investor portfolios. Bitcoin’s fundamental and technical underpinnings are improving while gold’s deteriorate… Gold is fighting a battle with Bitcoin, which can earn 6-8% in crypto savings accounts and is well on its way to becoming a global reserve asset in a digital world,” reads the report.

According to Bloomberg, the rising institutional and retail demand for Bitcoin could see it reach “price extremes” akin to those in the 2013 and 2017 bull runs. If this were to happen, BTC “would approach $400,000.”