Ethereum just rocketed to a new all-time high despite the apathy in the Bitcoin price, which fell toward $30,000 on Sunday morning. 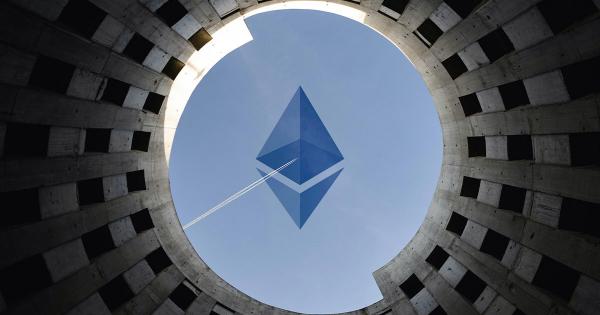 Ethereum just rocketed to a new all-time high despite the apathy in the Bitcoin price, which fell toward $30,000 on Sunday morning.

The price of ETH is up 15 percent in the past 24 hours, making it one of the top-performing crypto assets in the top 100 by market capitalization, according to CryptoSlate market data.

Bitcoin is flat, as suggested earlier. The cryptocurrency has entered a period of consolidation over the past week, falling as low as $30,000, then bouncing back toward $33,000 as of this article’s writing.

The community is excited about this accomplishment.

Jeremy Allaire of Circle commented that with Ethereum setting a new all-time high, the “entire” decentralized finance landscape is set to see “explosive growth” in the months and years ahead.

Alex Wice, a prominent FTX trader that did over $b billion worth of volume in a single month by himself, recently posted a tweet “54% 0.1.” While this may look like two random numbers, this is an indication that Wice thinks that Bitcoin Dominance could hit 54 percent from 62 percent right now, along with a 0.1 ETH to BTC ratio, which is around 125 percent higher than the current level.

While Bitcoin Dominance dropping by eight percent doesn’t sound like a large feat, it would cause a massive re-rating in certain altcoins, which have extremely small market capitalizations compared to BTC.

Did you think this was a joke, Anon?

Chris Burniske, a partner at Placeholder Capital, thinks that further strength in the Ethereum price relative to Bitcoin could push the altcoin market seriously higher.

He shared the chart below recently, which shows that Ethereum is pushing for blue skies against BTC as it aims to pass above a critical resistance level that may indicate there is massive growth on the horizon for the largest altcoin:

“Getting deja vu from March 2017, when all energy shifted from $BTC (ETF at the time) to $ETH. That’s the far left yellow mark, with the right yellow mark Jan 2021. When $ETH decides to move against $BTC in a month, it really moves.”

Those expecting $ETH to bump its head against $BTC, instead watch as $ETHBTC pushes for blue skies.

We’ve already been seeing this take place as altcoins have exploded higher over the past 24 hours.

Uniswap, 1inch, Aave, amongst a swath of other DeFi coins have rocketed over 20 percent higher in the past 24 hours as the decentralized finance space re-rates against other altcoin sectors and against Bitcoin most importantly.