Tesla CEO Elon Musk has just boosted “meme crypto” Dogecoin (DOGE) in the stratosphere by just tweeting a photograph of a rocket taking off and adding a single word to it: “Doge.” In just one hour, the price of DOGE surged by up to 75.6% and reached around $0.056. 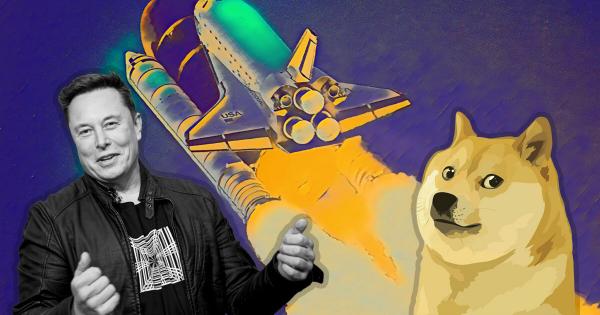 Image by NASA-Imagery from Pixabay

Tesla CEO Elon Musk has just boosted “meme crypto” Dogecoin (DOGE) in the stratosphere by just tweeting a photograph of a rocket taking off and adding a single word to it: “Doge.”

In just one hour, the price of DOGE surged by up to 75.6% and reached around $0.056. The coin’s 24-hour trading volume has also exceeded $7 billion while its market capitalization currently amounts to $6.4 billion.

After witnessing what he did—again—Musk has burst into a series of meme-tweets, starting with “ur welcome.”

Subsequently, Tesla CEO also stated—in quick succession—that “No need to be a gigachad to own,” “Dogecoin is the people’s crypto,” “No highs, no lows, only Doge,” and “Low-key Loki.” For the record, Musk did not clarify whether he was actually trolling his 45.1 million followers or not.

Meanwhile, shortly after the Musk-propelled Dogecoin rocket gained a lot of momentum, CoinGecko reported that its platform is “over capacity,” perhaps due to a sudden influx of DOGE persons and space-loving users.

GME shorting means that institutional traders were profiting off of the stock’s price going down. When the WSB army boosted GME by over 1,500% in just one month, hedge funds such as Melvin Capital suffered huge losses. And that is exactly what WSB’s plan was.

Next time, we try pull *up* method pic.twitter.com/J1M7WHLRDR

Just a week ago, DOGE already surged by 800% and entered the top 10 cryptocurrencies as WallStreetBets turned its sights to crypto. After Musk’s tweet today, the coin quickly jumped from 14th to 12th place already.

For more information, explore all meme coins on CryptoSlate.