The downturn in token price has triggered an exodus of GPU miners, resulting in a flood of availability in graphics cards. 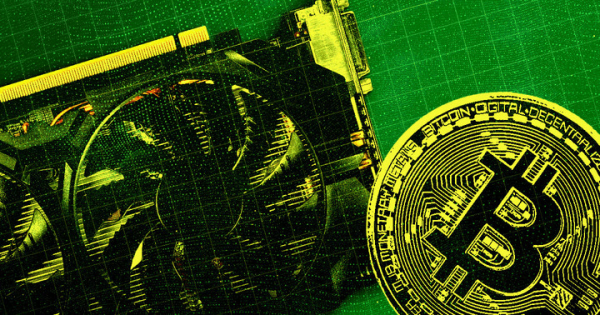 According to PC Gamer, crypto miners are dumping their GPUs in increasing numbers as token prices falter during the downturn.

The knock-on effect has seen a steady decrease in the cost of graphics cards as the market gets flooded with availability.

In analyzing European prices, Tom’s Hardware reported a divergence in pricing between manufacturers. AMD offerings, on average, are currently 8% below retail, whereas Nvidia products are still 2% above retail on average.

Nonetheless, gamers, who have long and hard complained about being priced out of the market, will welcome the development.

The first is corporate mining companies with deep pockets and the freedom to relocate operations wherever conditions, such as the cost of electricity and regulatory support, are most favorable.

Some individuals approach crypto mining as a profitable hobby. Still, they tend to be frozen out of mining ASIC tokens, such as Bitcoin, due to the intense competition from the first camp.

At least in the past, Hobbyist miners could compete by mining non-ASIC tokens using GPUs — the most popular being Ethereum, while others include Monero, Ravencoin, and Ethereum Classic.

However, falling hash rates hint that hobbyists are leaving.

The drop suggests miners are leaving the network, but it’s unclear why. In the case of Ethereum, the transition to a Proof-of-Stake (PoS) consensus mechanism means plans are in place to make mining increasingly tricky and therefore unprofitable, in what is known as the difficulty bomb.

As the Merge between the Proof-of-Work (PoW) and PoS chains nears, this is a factor weighing on miners’ minds. At the same time, falling token prices and rising global energy costs are also in play.

Unlike Ethereum, Monero has no plans to transition to a PoS network, suggesting the GPU mining exodus is industry-wide and driven primarily by profitability concerns.

Until the next bull cycle, gamers no longer have cause to blame GPU miners for lack of inventory and price gouging.