On Sunday, Oct. 20, crypto analyst Alistair Milne shared a chart that shows Bitcoin breaking its monthly downward trend, finishing its weekly close up 4 percent in the past 24 hours. Over the past month, Bitcoin is down 18 percent from its Sept. high of $10,182.

Since the July 2019 high, the Bitcoin price has declined by 43 percent against the USD and a dip below the $7,000 level would indicate a 50 percent drop for BTC.

As previously reported by CryptoSlate, the daily volume of Bitcoin on BitMEX, dropped by 95 percent from the yearly peak to the lowest point of the year. Since the July 2019 peak, during which the Bitcoin price rose to $13,920, the weekly volume of BTC on BitMEX dropped from $55 billion to around $15 billion, by more than 72 percent.

In a recent report shared with CryptoSlate, OKEx says Bitcoin testing critical levels is nothing to worry about. According to OKEx, the weakening of the U.S. dollar could be what drove Bitcoin’s price down.

The U.S. Dollar Index (DXY) has been trading below its four-month trend line, which is why the U.S. Federal Reserve is expected to cut interest rates in the next few months.

While lower interest rates will help strengthen the dollar, a weaker dollar could boost exports from the U.S. and improve domestic profits. Both scenarios could be beneficial to Bitcoin, the Malta-based exchange said. 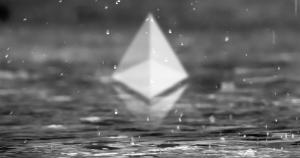 HDR Global Trading Limited owns and operates BitMEX which is a trading platform that offers investors access to the global financial markets using only Bitcoin. All profit and loss is in Bitcoin, even if you’re buying and selling altcoin contracts. BitMEX does not handle fiat currency. Learn More ➛