Analysts tend to compare Ethereum and Ethereum Classic in terms of their technicalities and price action. 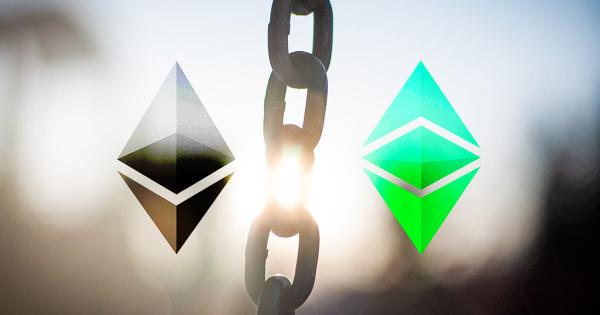 Analysts tend to compare Ethereum and Ethereum Classic in terms of their technicalities and price action. However, IntoTheBlock took a different approach to determine the fundamental differences between the two.

A glimpse at IntoTheBlock’s dashboard, for instance, reveals that ETH has a market cap and price 26 times higher than ETC, according to Contasti. The former is also more correlated to Bitcoin and the number of larger transactions taking place on its network is significantly higher than the latter.

A deeper dive into the In/Out of the Money (IOM) indicator portrays a bigger difference between these cryptocurrencies. This fundamental index provides a “holistic view” of how well investors are doing by holding these digital assets.

Although the difference between investors that are in profits is of about 10 percent, the activity on the network of these cryptos shows a bigger discrepancy.

The big gap in large transactions between these cryptocurrencies could be correlated to the activity by exchanges, over-the-counter desks, hedge funds, and other big players, said Contasti.

IntoTheBlock’s Ownership by Concentration model shows that there are five Ethereum whales holding 9.33 percent of its circulating supply. There are also 150 investors, which concentrate between 0.1 to 0.99 percent of the circulating supply, holding a total of 40.14 percent and the remaining 59.86 percent is distributed among retail investors.

On the other hand, Ethereum Classic is less distributed than Ethereum. Approximately, 72.65 percent of the tokens in circulation are concentrated in the hands of big players—15 whales hold 39.82 percent and 140 investors hold 32.8 percent. The other 27.35 percent is distributed among retail investors leading Contasti to believe that “exposure to these players is considerably higher.”

It is worth mentioning that throughout the bull rally that the cryptocurrency market went through since the beginning of the year Ether saw its price surge over 127 percent while Ethereum Classic skyrocketed nearly 215 percent. Considering the price percentage increase and the different metrics mentioned above, Contasti believes that ETH could represent a better investment vehicle than ETC.

Nevertheless, the analyst does not advise anyone to invest in any of these two cryptocurrencies without an understanding of the risks involved.

According to crypto analytics firm IntoTheBlock, 43 percent of ETH addresses are in profit with the Ethereum spot and derivatives markets seeing explosive growth in key metrics, making the second-largest crypto one of the top-10’s biggest showstoppers this year.