Crypto prices fall amid fears of nuclear disaster in Europe

Crypto prices remain volatile after concerns of Nuclear disaster in Europe subside. However, fighting around the Zaporizhzhia power plant may not be over causing uncertainty in the markets. 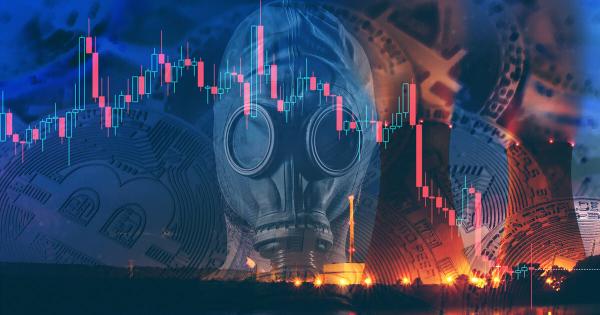 Europe is waking up to the news that there has been an attack involving nuclear materials in Ukraine. Europe’s largest nuclear power plant, Zaporizhzhia, was shelled by Russian forces, with reports surfacing around 1 am GMT. Footage of the blaze was captured via Livestream and showed fires breaking out outside of the main facility. The video appears to display what looks like flares being launched towards the power plant. It is possible that a flare caused the fire rather than being a direct result of the shelling.

⚡️This is what the situation at the #Zaporizhzhia NPP looks like right now pic.twitter.com/1q5qguBMLs

Stocks, futures and crypto prices tumbled as the news broke amid fears of a disaster even more significant than Chernobyl. S&P, DOW and NASDAQ Futures fell steeply, around 2%, in the minutes following the news.

…the fuel can get so hot it catches fire – that, plus a shattering of the building, is really the worst-case scenario. That could release a quantity of radioactivity even worse than Chernobyl, potentially. (17/x)

Nervousnesses increased during the night as world leaders ordered Russia to cease its attack on the nuclear facility. Boris Johnson, the Prime Minister of the United Kingdom, took to Twitter:

“Russia must immediately cease its attack on the power station and allow unfettered access for emergency services to the plant.”

The price of BTC pared losses on the day, falling to a low of $41,000 before recovering slightly. It is currently trading around 7% down from the local high seen on March 2.

Emergency services extinguished the fire around 4 am GMT, and firefighters are now on the scene. As fears subside world’s largest cryptocurrency recovered to approximately $41,600 as it appears investors bought the dip around 8 am GMT.

The International Atomic Energy Agency has announced that a press conference will be held at 10:30 CET today to report on the matter. If information arises to suggest that the situation is not, in fact, under control, then we could see further losses in both crypto and stock prices throughout the day. However, the risk to human life is the most significant concern.

Current information suggests that Russian forces are in control of the power plant. However, fighting could continue should Ukraine attempt to regain control. These fears may be responsible for the current instability in the market as BTC gave up its gains from this morning, dropping to around $40,800 before recovering back over $41,500 within minutes.