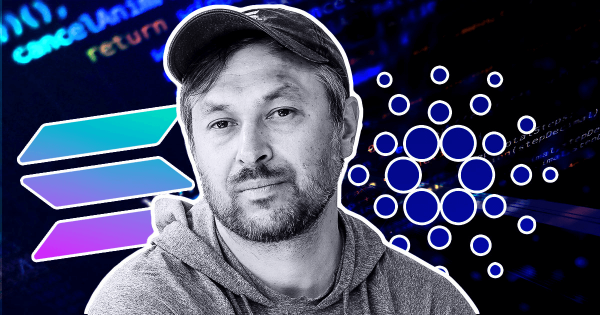 Yakovenko said cutting corners, or as he phrases it, to “kiss a couple of frogs in your design,” is the only way to ship on time. Such statements imply security, reliability, and robustness are not pressing concerns for Yakovenko.

It’s unclear when the clip was filmed. However, the tweet was posted shortly after another Solana Network outage.

The Solana Network suffered another outage

confirmed that a “bug in the durable nonce transactions feature” had halted the entire network.

“Earlier today a bug in the durable nonce transactions feature led to nondeterminism when nodes generated different results for the same block, which prevented the network from advancing.“

The network was restored following a “restart of the Mainnet Beta” by the evening of June 1. A further update, two hours later, requested validators to upgrade software versions.

According to Solana’s uptime tracker, there have been 12 instances of downtime this year, three of which were major outages.

As expected, social media was awash with negative comments. A recurring theme in the comments was doubt about the project’s viability due to the frequent network outages.

What did Yakovenko say?

During the short video clip, Yakovenko said he’s familiar with Cardano, having done Haskell programming before.

But, examining their approach to building blockchain technology, Yakovenko called it “esoteric,” meaning highly specialized and appealing to/understood by a small niche. He added that Cardano’s unwavering focus on correctness is why it will never ship.

“The approach they’re taking is so extremely like, esoteric, with such a huge stick up their *ss about correctness. This is why they’re never going to ship.”

Yakovenko explained the reality of coding as he sees it, in that getting things done is the top priority, even if that means kissing frogs along the way.

“As an engineer that has to ship code, and get paid for it, it’s just that stuff doesn’t work. You gotta like, swallow, you know, kiss a couple of frogs in your design and ship stuff and just get it done…”

To date, the Cardano chain has had 100% network uptime.