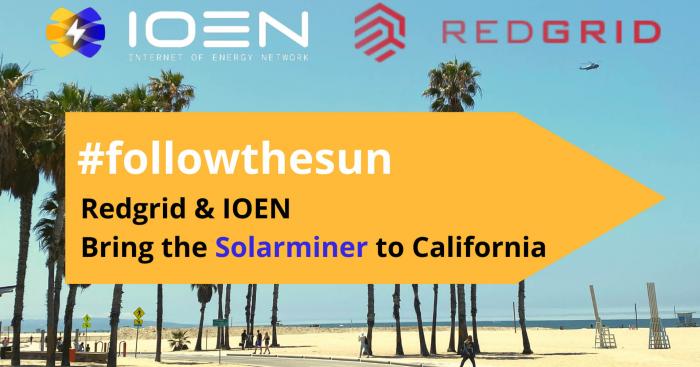 LA-based developer Kinfolk is serious about maximizing the clean energy potential of its developments and improving the quality and cost of living for its residents. Property developers have been reluctant to deploy solar panel installations on their rooftops due to uncertain financial returns. Sustainable developments are a key differentiator in competitive rental markets in LA. But the Solarminer has gone live atop the rooftop of Rose Ave, Venice, and will deliver this multi-dwelling complex a financial advantage rather than increase expenses.

Clean energy infrastructure is a high priority for Kinfolk’s residents. However, selling excess energy back to the grid in California has not delivered a financial benefit. Now, Redgrid’s energy data software and IOEN’s protocol are managing the ‘virtual microgrid’ of solar panels, and the Solarminer rig in real-time on the Rose Avenue complex, and will deliver a faster payback for investment in renewable energy assets. In addition, rolling out the Solarminer across Kinfolk’s development portfolio of 250+ properties will encourage the city-wide adoption of renewable energy, including Electric Vehicle (EV) infrastructure.

Bitcoin mining has come under fire for its increasing carbon footprint and diminishing economic viability as energy prices increase. So too have increased costs associated with EV infrastructure and electrification of other appliances. Nevertheless, the adoption and awareness of Bitcoin mining are rising fast. Energy costs associated with mining will only increase along with demand for low-cost, high-return clean energy solutions that are adaptable and scalable. Redgrid and IOEN’s Solarminer rig has begun its #followthesun journey
in sunny Venice, LA, at the beginning of summer

● Demonstrating an excellent use Case for IOEN’s protocol with signals from inverters and solar infrastructure.

● The protocol enables connected agents to participate in a “market” that is created by the Inverter agent.

● Signals are read every 30 minutes from both the Invertors and the Weather/Grid feeds. Both these inputs are combined to provide a “prediction” for the next 30-minute period of how much “surplus” solar will be available within the site from the PV System

● In this way, the rigs will “soak up” any surplus solar which will be used to mine for Bitcoin (or Ethereum)

About The Internet of Energy Network

Redgrid’s energy data platform, using the IOEN protocol, allows residential or commercial users to reduce their carbon footprint by using energy when there are more renewables in the grid. Redgrid’s technology transforms the built environment into a cooperative grid of energy-consuming and producing devices, creating the only energy market that settles transactions in real-time worldwide. Redgrid uses the IOEN protocol to deliver the future’s smart city technology to your homes. (https://www.redgrid.io/)