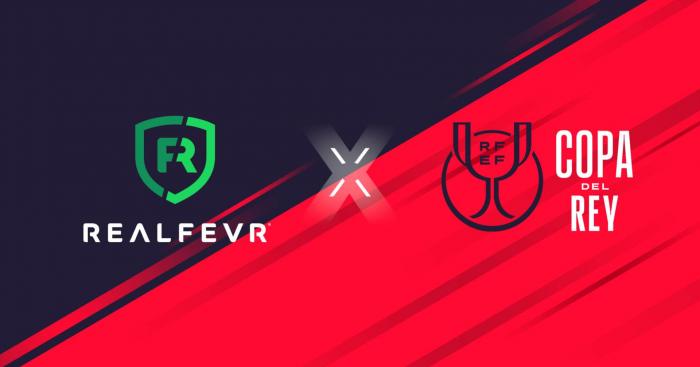 RealFevr and the Royal Spanish Football Federation (RFEF), the highest governing body of Spanish football, announced today a three-year partnership for the gamification of historic and iconic moments of Copa del Rey.

RealFevr has developed a decentralized Web3 platform that allows football fans to buy digital packs, collect historic video moments and sell them peer-to-peer (p2p) on the marketplace.  The innovative Portuguese startup is currently positioned as one of the most experienced companies in this groundbreaking industry, having launched and sold out in a few hours several collections of moments, representing more than 145 thousand packs sold since the first edition launch. These moments not only can be collected, but also be used in their upcoming Web3 game: FEVR Battle Arena.

The Royal Spanish Football Federation (RFEF) will become the first national football federation in the world to create official digital video collectibles from one of its competitions. This step towards innovation is fully in line with the 2020-2024 strategic plan of its current Board of Directors, which defends the professionalization, modernization, and digitalization of the organization as one of the great challenges. With the new format of the Copa del Rey, promoted 4 seasons ago, the tournament retains all its prestige and historical roots while it has gained in emotion, number of goals and attractiveness for spectators.

“Progress is made one step at a time. And today, we proudly affirm being one step closer to the implementation of our vision, not just as a company, but also as an active contributor to the digital revolution in the sports industry. RFEF trusted us to take this massive step, becoming the first national football federation in the world to do so. And now, we will be able to bring beautiful pieces of Spanish football history to fans all over the world, in the form of digital collectibles.” said Fred Antunes, CEO of RealFevr.

“Our agreement with RealFevr is great news for Copa del Rey fans around the world and will allow us to share with them historical moments of the competition that will be unique within the web3 ecosystem thanks to Realfevr’s expertise and magnificent community of users.” stated Rúben Rivera, RFEF’s Marketing Director.

The first RealFevr x RFEF drop of moments will be released in 2022, so all fans who are interested in growing their personal football collection should follow RealFevr and RFEF social media, or register their interest at www.realfevr.com.


RealFevr is a Portuguese startup responsible for launching the first football marketplace for NFTs, in video format. All digital collectible moments are fully licensed, thus having real intrinsic value. Based in Lisbon and created in 2015 with the aim of revolutionizing the Fantasy Leagues market, RealFevr has quickly established itself in the growing blockchain, NFTs, and cryptocurrency market. In addition to the exclusivity of collectibles in video format whose usefulness goes beyond the mere collector’s perspective, these will also be playable items in Web3 games that the company is developing. $FEVR is the ecosystem’s fuel, being the currency used to buy the drops.

The Royal Spanish Football Federation (RFEF) is the governing body of football in Spain. The federation organizes the most important tournaments, such as the “Copa del Rey”, the “Supercopa de España” and the women’s “Copa de la Reina”. With over 113 years of history, RFEF is now embracing a new path toward innovation in sports, seeing the professionalization, modernization, and digitalization of the organization as the main objectives.