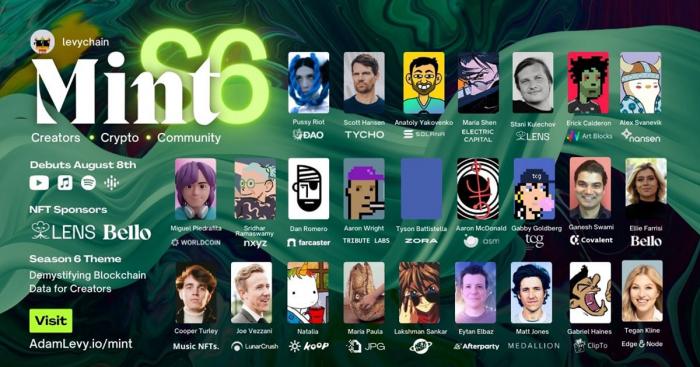 Adam Levy returns to documenting the frontier of the web3 creator economy with Mint Season 6. The podcast is a leading audio and video series exploring the explosive rise of the web3-native creator, highlighting those using crypto primitives to build the internet communities of tomorrow.

RSVP to receive episode one by visiting https://adamlevy.io/mint-season-6.

The next two months will explore the world of blockchain data alongside 25 creators, collectors, and founders who will share how to use on-chain insights to build promising communities in the bear market.

Season 6 sponsors include Lens Protocol and Bello, who support Mint by collecting the podcast’s soulbound NFTs granting them promotional benefits throughout the season.

Creators are a class of users who’ve historically been exploited in web2 and restricted from accessing the value they generate for platforms.

Season 6 will demystify blockchain data for creators so that they can learn the importance of being independent and data-driven, especially in an emerging decentralized world where platforms are shifting towards radical transparency and interoperability thanks to distributed ledger technology.

Levy said, “We’ve barely skimmed the surface of what data ownership means in web3, so I’m hoping this season will help creators realize the importance of owning your audience.”

The season is available to enjoy across all video and audio streaming platforms, as well as new social apps built on Lens Protocol, such as Lenstube and Lenster.

“Working with Lens Protocol was a no-brainer because I have ambitions to not depend on web2 social channels over time and to experiment with these new primitives of bringing my audience with me across platforms. I just can’t do that today in web2,” said Levy.

Season 6 highlights the importance of platform independence and blockchain analytics tools to grow a sustainable collector base and digital community on the emerging decentralized internet.

“Becoming platform-independent should be the goal for all creators, and tapping into the wealth of on-chain data as a tool for building and monetizing communities will separate top-notch creators from the rest; that’s why I’m introducing my new analytics tool Bello this season.”

The following two months will feature interviews with some of the sharpest data heads, high-profile creators, and ambitious founders building towards a data-enabled web3 creator economy, such as:

Submit your email to receive all 20+ episodes for free by visiting https://adamlevy.io/mint-season-6.

Reaching over 20,000 web3 creators and collectors per month, Mint Podcast, hosted by Adam Levy, is a leading audio and video series exploring the web3 creator economy.

Lens Protocol is a tech stack for building a decentralized social web that enables people to bring their digital profiles, social graph, and content to different web3 apps. With Lens, developers can build tools, applications, and platforms that empower creators with full ownership and control over their content, community and engagements.

Bello is the no-code blockchain analytics tool that empowers creators with actionable insights about their collectors in one simple search. Unlike other analytics platforms that benefit SQL-experienced users or professional NFT traders, Bello is a haven for non-technical users in a world where blockchain data is hard to fetch and understand. With no-code insights at the foundation of Bello’s pursuit, we help creators learn more about their collectors in a friendly and intuitive manner.

Learn more about your collectors today by visiting https://www.bello.lol/join.