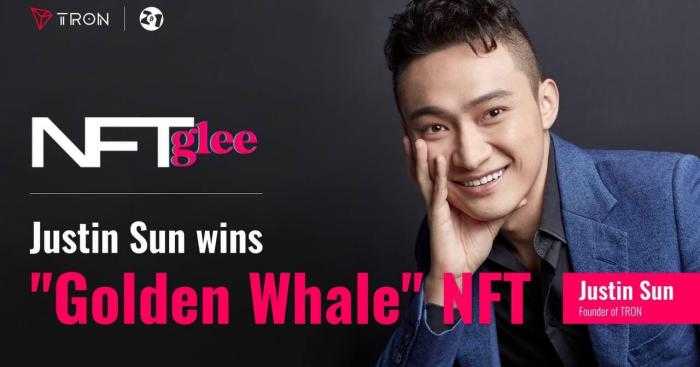 Singapore, Singapore, 5th June, 2021  – Justin Sun, the founder of TRON has won the bid for the first ever Golden Whale Pass as an NFT in an auction hosted by NFT Glee in association with Bitcoin 2021. The pass gives the holder lifetime whale access to all future Bitcoin Conference events as well multiple VIP benefits at the Bitcoin 2021 conference. The hammer price of 12.6 BTC makes the Golden Whale Pass the highest priced Bitcoin NFT ever.

Bitcoin 2021 is set to be the largest event in crypto history, with a crowd of over 50,000 people expected to descend on Miami for the event. Bitcoin 2021 will feature a massive collection of the best and brightest minds in the space including US policy makers and senators, thought leaders like Jack Dorsey and Microstrategy chairman and CEO Michael Saylor amongst others. The event will feature dozens of one-of-a-kind BTC activations and the chance to celebrate the world’s best technology and innovative projects poised to revolutionize.

While 2020 was the year of DeFi, 2021 was the year NFTs captured mass fascination. Interest from respected thought leaders, athletes, influencers and celebrities has resulted in the NFT space booming with new innovative ideas and investment. Justin has been an avid proponent of NFTs since the very beginning and has used his platform to further educate and transform the NFT economy and its use cases. Justin believes that NFTs are not only a fantastic platform for digital artists to shine but also can serve as a bridge between the traditional and digital art worlds. Recently Justin donated his entire collection of art including “OCEAN FRONT” by Beeple, Picasso’s “Femme nue couchée au collier”, Andy Warhol’s “Three self portraits” and most recently a full collection of works by the renowned artist Pak; to the APENFT project as he was impressed by the team and their vision to be the ARK Funds in the NFT space. The APENFT team successfully launched their first native token $NFT on the new and improved Huobi Prime as well as on Poloniex LaunchBase 2

“Bitcoin epitomizes everything that cryptocurrency innovation stands for, and will continue to stay in the forefront of our industry as we enter mass adoption,” said Justin Sun. “It is exciting to see large scale NFT use cases such as the Golden Whale Pass and I am excited to be a part of this legacy. Congratulations to The Bitcoin Conference team and the NFT Glee team, I plan on donating this NFT to the APENFT project and look forward to using my pass well into the future.”

TRON is dedicated to accelerating and the decentralization of the internet through blockchain technology and decentralized applications. Founded in September 2017 by Justin Sun, the company has delivered a series of achievements, including MainNet launch in May 2018, network independence in June 2018, and TRON’s Virtual Machine launch in August 2018. July 2018 also marked the acquisition of BitTorrent, a pioneer in decentralized services boasting approximately 100M monthly active users.