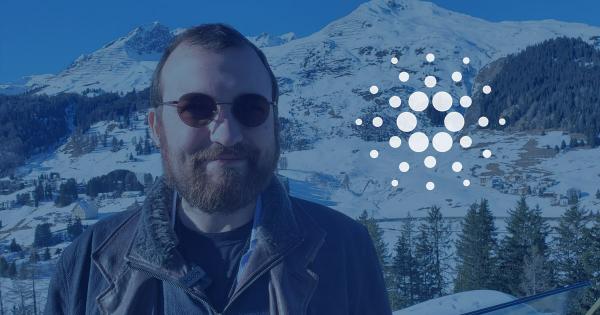 Charles Hoskinson, the CEO of IOHK, said that the huge amount of time, effort, and money spent has resulted in a unique product on the market that’s set to fulfill even the highest expectations. It will be easier to issue and maintain digital assets on Cardano than it currently is on Ethereum, Hoskinson said. IOHK, the company behind the ambitious Cardano project, is on track to fulfill all of the commitments it made for 2020.

This year set to be the best one for Cardano

The current volatility in the crypto market has put prices to the forefront of all discussions, unfairly leaving out other topics from the limelight. Zooming into hourly or daily candles makes it hard to see the big picture and appreciate the effort and progress that has been going on behind the scenes in the industry.

Most of that progress comes from Cardano, the ambitious blockchain project created by IOHK. The research-heavy, still unfinished network has been rapidly developing in the past six months and is, according to Charles Hoskinson, on its way to fulfill all promises made for 2020.

The CEO of IOHK shared his optimistic outlook on Cardano in a recent live stream, saying that years of research and development have led the company to a point where it was comfortable saying Cardano will become one of the best cryptocurrencies on the market this year.

This, however, has little do with how it performs in terms of price. Instead, Hoskinson said, it has everything to do with what the network has to offer. In an outspoken and transparent way that has become synonymous with Cardano, Hoskinson explained that the company began working on the network as an aspirational research project five years ago.

They committed to studying both proof-of-stake and proof-of-work protocols in a bid to find which one would fit the needs of the network better. The research on the two very different protocols was done at the same time so that each thread could be abandoned in favor of the other.

According to Hoskinson, this approach was what enabled the company to create such a reliable and scalable proof-of-stake protocol. From a research perspective, Cardano’s Ouroboros PoS protocol is already a huge success. The Ouroboros Genesis with its staking components is currently able to run a full smart contract system and enable building a full cryptocurrency on the network.

The millions of dollars that have been spent on developing Cardano’s UTXo model will enable it to have best in class multi-asset support this year. It will be easier to issue, maintain, and track assets on Cardano than on Ethereum by the end of the year, Hoskinson said, adding that Cardano won’t treat other cryptocurrencies issued on its network differently, as is the case with Ethereum, ether, and other coin standards. All of this will make Cardano’s model very appealing to dApp developers, as it is a natural and organic path for Bitcoin to upgrade and create smart contracts.

While Hoskinson seemed incredibly optimistic about Cardano’s future, despite the current market uncertainty, he noted that there was still a lot left to do. He said that the Cardano Foundation, Emurgo, and IOHK were all still on the hook for not developing some of the essential parts of the Cardano ecosystem—a blockchain explorer, a smart contract system, and a decentralized exchange.

Hoskinson explained that while Bitcoin’s explorer only needs to look at the transactions made on the network, a Cardano explorer will have to take into consideration its voting system, its smart contract system, and its stake pools.

A smart contract system that enables different programming languages was in scope for 2020 and will be introduced later this year, Hoskinson said. When it comes to a decentralized exchange on Cardano, he said that it was “commercially critical” but that it will be done once Ouroboros was completely optimized.

Other things that still need a lot of work include Cardano Docs, a repository of all the documentation related to the development of Cardano. Hoskinson said that it was currently “badly out of date,” and that a huge effort to update is currently underway and will be completed in June or July this year. Once completed, Cardano Docs will include a repository for all formal specifications and architectural diagrams of the network, where users will be able to access mathematical descriptions of the code the network was built on.

All of this goes hand-in-hand with IOHK’s “lingua franca” approach to communicating. Hoskinson said that instead of using marketing speech and sensationalist language, he preferred to back everything with specifications and raw mathematical data.

What does the future hold for Cardano

One of the biggest updates Cardano will see this year is a philosophical, not a technical one. Namely, Hoskinson said that IOHK will have a full opinion on what its stance on interoperability will be.

First efforts to understand how to talk to other cryptocurrencies, including proof-of-work networks, were initiated back in 2015 and are still ongoing. Hoskinson said that time will tell whether interoperability was the way to go for Cardano. It will depend on whether the top three value drivers in the crypto industry, which include Bitcoin, Ethereum, and XRP, will move in the direction of interoperability. If they do, he said, that will be a road for Cardano to take.

However, other major technical upgrades will be coming to Cardano as well. According to Hoskinson, optimizing Ouroboros and finishing up all of its components is almost done and the protocol should be handed over to a second-team funded by a different entity that will work on it long-term.

IOHK’s partners are working on implementing Hydra, while the company itself is working on the Voltaire era with its designated product manager and product team. Hoskinson believes Voltaire will be the most significant and important release for Cardano this year, as it will contain the improvement proposal system, requests for funding, and voting system.

The Byron reboot will roll out in April and is set to show just how good the principles IOHK has been establishing since 2015 are.

Hoskinson also addressed the concerns many in the Cardano community had, which include the lack of concrete launch dates of key products and constant delays. He explained that neither IOHK nor the Cardano Foundation had any incentives to delay releases on purpose, as all of the research that goes into Cardano is funded by Hoksinon and IOHK.

New products and updates are constrained by Cardano’s rock-solid principles and by the process set up by IOHK. The company isn’t concerned with speeding up launches in order to push the price of ADA up, he said.

Making sure Cardano is as competitive as possible, building new stuff and stubbing old stuff out, and bringing aboard new partners—this, according to Hoskinson, sums up 2020 for Cardano.

IOHK, the company behind the Cardano (ADA) blockchain, has announced the launch of the Ouroboros Hydra protocol.

Charles Hoskinson, the CEO of IOHK, said that the company didn’t want to publish a final release date for the Shelley mainnet until all of the risks surrounding it were mitigated.