Wouldn’t it be weird if the first thing you saw in your morning newspaper was a massive Bitcoin logo? Well, that’s what happened on August 24, when readers of the popular Hong Kong newspaper the Apple Daily were treated to a full-page advertisement promoting the leading cryptocurrency. 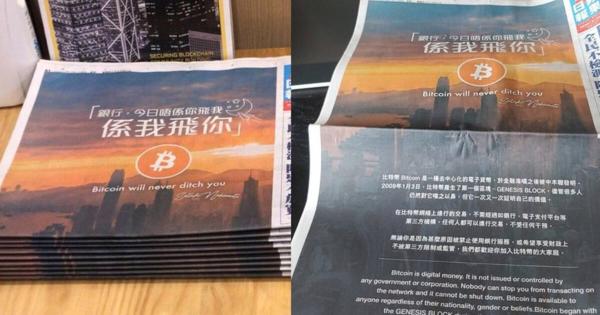 Wouldn’t it be weird if the first thing you saw in your morning newspaper was a massive Bitcoin logo? Well, that’s what happened on Aug. 24, when readers of the popular Hong Kong newspaper the Apple Daily were treated to a full-page advertisement promoting the leading cryptocurrency.

We don’t know how much they spent but on Aug. 24, a vast majority of the Apple Daily’s front page was covered in an ad about Bitcoin by Genesis Block, an over-the-counter crypto trading desk and event space. Genesis Block should not be confused with Genesis, the digital asset lender and broker.

The tagline was “Bitcoin will not ditch you,” but there was text on the advertisement, written in both Chinese characters and English letters, that delved into Bitcoin’s basics and ethos:

“Bitcoin is digital money. It is not issued or controlled by any government or corporation. Nobody can stop you from transacting on the network and it cannot be shut down. Bitcoin is available to anyone regardless of their nationality, gender, or beliefs.” 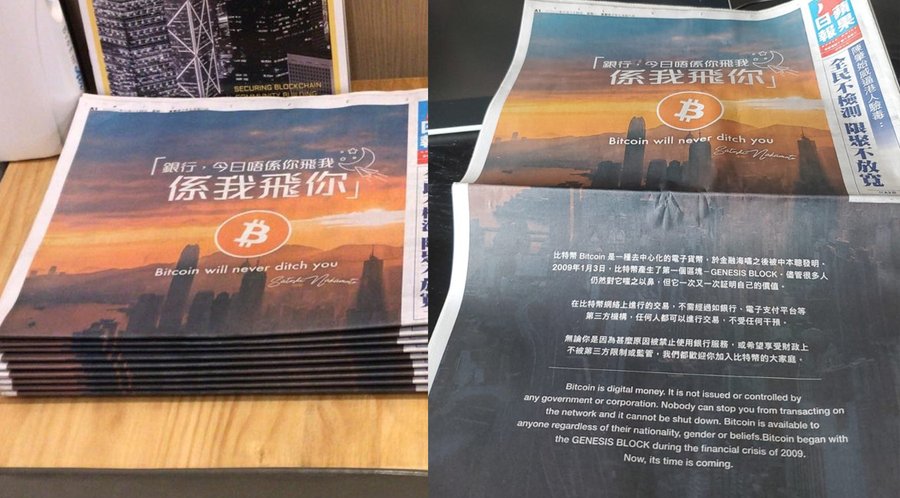 Although there were no mentions of it in the advertisement, there purportedly have been individuals attempting to expatriate their capital and wealth out of Hong Kong due to political uncertainties.

Max Keiser and others in the space argue that this capital flight is likely materializing in Bitcoin purchases, as once one owns Bitcoin, it is technically not bound to any country or fiat system.

Not the only crypto company advertising Bitcoin

Genesis Block is far from the only crypto company advertising Bitcoin and related technologies in these trying times.

Digital asset manager Grayscale Investments aired the ad below on CNBC, MSNBC, FOX, and FOX Business earlier this month. Funny enough, the ad never once uses the term “Bitcoin” (or “Ethereum” for that matter), but it was purportedly successful.

The company first made its foray into national TV advertisements with its “Drop Gold” campaign, which generated quite the stir on Wall Street where Bitcoin is not yet seen as superior to the precious metal.

Shortly after Grayscale’s advertisement went live, Mike Novogratz‘s Galaxy Digital purchased a full-page advertisement in the Financial Times. The advertisement told its readers to “invest in Bitcoin,” calling the asset a “hedge independent of the hegemony.”