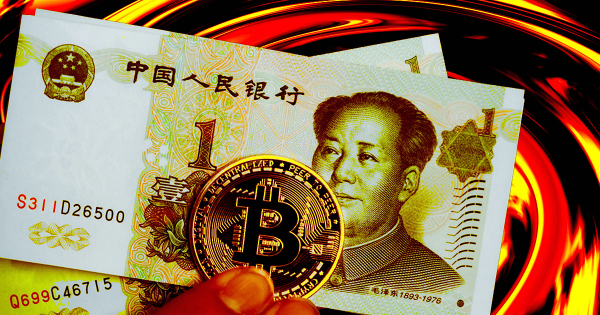 According to the report, the criminal group was involved in more than 300 cases of fraud and had been operating since 2018.

Authorities in the county started investigations after the director of the County Public Security Bureau, Liu Xialong, was defrauded of 7.8 million yuan. An in-depth investigation showed that the criminal group has a vast network of collection operations in places such as Guangdong, Fujian, etc.

It was revealed that the authorities also seized 300 million RMB and 100 mobile phones from the suspects.

Investigations revealed that the group led by Hong Moumou converted the funds obtained from gambling and fraud into cryptocurrencies before laundering them into U.S. dollars.

Another local report revealed that the Chinese authorities also busted a money laundering operation in Fujian where criminals used the digital yuan to launder 200 million RMB.

According to the report, the criminal operation was led by Zhang Moumou and Lai Moumou. They used the national digital currency for various illegal activities like providing funding for gambling, fraud, etc.

The Chines government is working to increase the adoption rate of the digital yuan by expanding the currency into four more provinces — Guangdong, Jiangsu, Hebei, and Sichuan — as a local means of payment.

According to SCMP, the digital yuan is tested in over 20 cities and regions. A top official of China’s apex bank, Fan Yifei, noted that the number of digital yuan users and the amount of transactions it is processing is “steadily growing”

Meanwhile, with China steadily working towards a nationwide launch of the CBDC, other countries have also attempted to explore a digital version of their national currency.