TRON’s new wave of developments could soon pay off 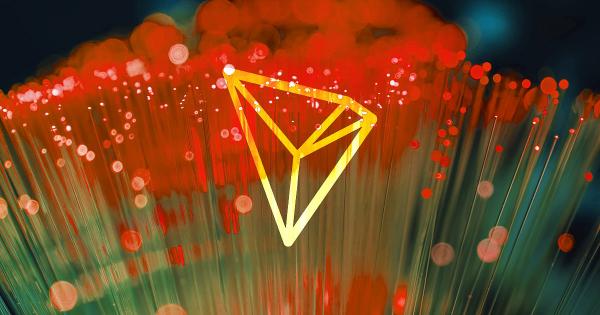 The TRON Foundation is making significant strides to push the adoption of its native cryptocurrency, TRX. In the last few weeks, the non-profit organization was able to secure different partnerships that increase the utility of its token and make it available to a wider market. The recent wave of developments is already felt in the price of TRX, which could soon continue to reach higher highs.

A new wave of developments

On Oct. 29, Samsung unveiled a comprehensive solution system to help developers build mobile-compatible decentralized applications (DApp). The Samsung Blockchain Platform SDK not only would enable developers to seamlessly create DApps, but also allow legacy apps to incorporate blockchain features to put them at the forefront of innovation.

In addition, Samsung revealed that TRON would be integrated into the Blockchain Keystore, a platform that allows users to manage private information and cryptocurrencies’ private keys with vault-like security. This would also let developers build applications on top of TRON’s blockchain.

“TRX is the native currency embedded within Samsung phones after the S10 and S11. That’s why I believe it’s very significant considering Samsung’s large user base, in which billions of people around the globe use their products every day. This gives individuals the opportunity to store TRX as well as TRC10 and TRC20 tokens in their wallets. One can also use these currencies easily to interact with all the dApps built on the TRON and Samsung platforms.”

Shortly after that, the TRON Foundation announced a partnership with Coingaming Group, one of the leading crypto gaming companies in the industry. The TRON community would now be able to use TRX in some of the most popular games in the space, Bitcasino.io and Sportsbet.io. With a minimum deposit of 100 TRX and no transaction fees, the integration makes it is cheaper and easier to play and bet with TRON.

“We always work hard to put our customers at the center of the universe, and by adding TRX gaming we are once again at the cutting edge of what is possible in this space. We are particularly excited to offer a low minimum deposit threshold and zero transaction fees, ensuring Bitcasino.io and Sportsbet.io gaming can be enjoyed by even more players for the first time.”

As TRON extends its utility, it is also expanding its reach. In a blog post, Poloniex announced that it would be listing TRX to its retail platform. The move would provide market access to the cryptocurrency for millions of retail investors. Customers can already start posting limit orders for TRX/BTC, TRX/USDT, and TRX/USDC. Full trading capabilities, as well as deposits and withdrawals, would be enabled in the “coming days.”

The recent wave of developments has even made the most skeptics bullish about the future of TRON. According to Bitcoin developer, Udi Wertheimer, TRON could flip Ethereum over the “next year or so.” Wertheimer argues that this cryptocurrency is experiencing a faster development than ETH, and has better censorship resistance qualities and a greater number of transactions. As the positivism around TRON mounts, its price is starting to show signs of recovery.

After hitting a low of $0.012 on Sept. 24, TRON quickly recovered and is currently up 72 percent. The upswing appears to have been predicted by the TD sequential indicator, which presented a buy signal (in the form of an aggressive thirteen) on TRX’s 3-day chart.

Even though this crypto reached a high of $0.023 on Oct. 30, it went back down to the 23.6 percent Fibonacci retracement area. Since then, TRON is mostly trading between $0.019 and $0.020. But, on Nov. 6 the TD sequential indicators gave another buy signal (in the form of an aggressive thirteen) estimating that TRX could soon resume its uptrend.

Based on its 12-hour chart, TRON is currently sitting in a no-trade zone. This area is defined by the lower and upper Bollinger bands that sit around $0.019 and $0.020, respectively. Trading within these support and resistance levels poses high-risk exposure due to the inability to determine in which direction the trend will result.

The low volatility that TRX is experiencing since late October took the Bollinger Bands to squeeze under this timeframe. Squeezes are indicative of periods of low volatility and are typically succeeded by periods of high volatility. The longer the squeeze, the higher the probability of a strong breakout that defines the direction of the trend.

Thus far, the Bollinger bands have been squeezing for over the last two weeks, estimating that a significant price movement is underway. A break above $0.020 could allow TRON to surge to the next levels of resistance at $0.023, $0.026 or $0.029.

Along the same lines, Crypto Rand, a well-known technical analyst in the crypto community, recently pointed out that TRX could be getting ready to “fly.” The analyst believes that the previous level of resistance around $0.018 is now becoming support, which is letting it “squeeze” against the local downtrend. 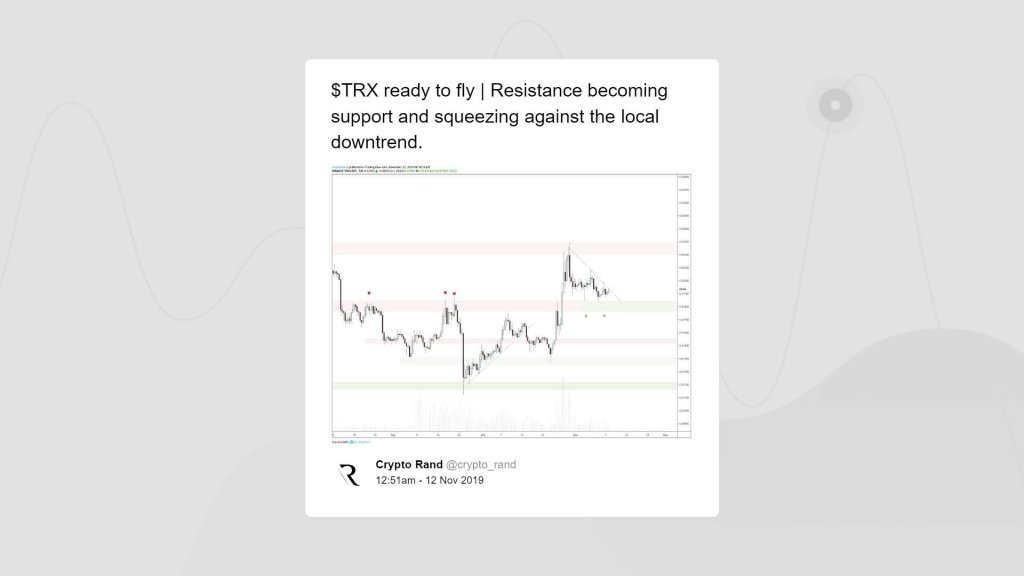 Despite the bullish sentiment seen across the technical analyses above, it is worth noting that a close below $0.018 could have the potential to invalidate these scenarios. Such a bearish move could take TRX to the next level of support around $0.017.

Chinese President Xi Jinping’s decision to “take the leading position in the emerging field of blockchain” could also be fueling the bullish sentiment behind TRON. In fact, in the latest crypto ranking index, China’s Center for Information and Industry Development (CCID) ranked TRON No. 2 among all cryptocurrencies in the market. TRON moved up one spot compared to the previous issue pushing Ethereum to the third position.

The hype behind TRON could just be getting started as the TRON Foundation continues to make strategic partnerships and China begins to embrace blockchain technology.

Blockchain-based gaming has long been one of the most popular and natural expressions of the continually-expanding decentralized economy.

For many cryptocurrency supporters, 2019 will be remembered for the sector’s resurgence and the improved usability of crypto assets.