The revenue of Ethereum-based decentralized finance platform MakerDAO surged by nearly 1,000% since the beginning of 2021. 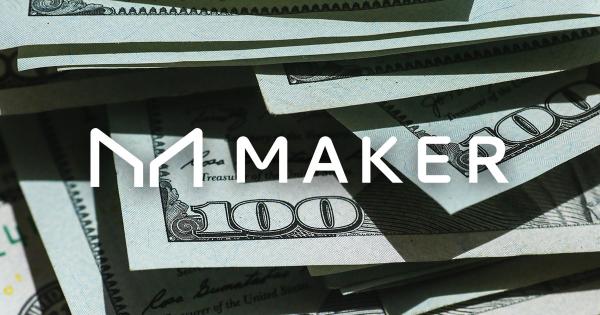 “It’s a testament of efficiency and expansion of Maker protocol,” said Growth at MakerDAO lead Doo Wan Nam to CryptoSlate in the regard.

MakerDAO is a decentralized autonomous organization based on the Ethereum blockchain. Being primarily a DeFi lending platform, it allows users to borrow and lend cryptocurrencies to each other as well as swap tokens and trade derivatives—all without any third-party intermediaries such as banks.

And yesterday saw it reach the $200 million annual income milestone.

It’s worth pointing out that this is an estimated figure based on the platform’s current performance. Still, it demonstrates an enormous growth MakerDAO saw over the past few months. By comparison, its average annual revenue amounted to just around $19 million on January 1—an increase of nearly 1,000% in just around 4.5 months.

According to metrics platform DeFi Pulse, Maker is currently the largest project in the sector by the total amount of value locked in it (TVL). Out of the cumulative DeFi TVL that amounted to just over $74 at press time, 17%—or $12.62 billion—was locked on MakerDAO.

Per MarketBurn’s data, the lion’s share of Maker’s revenue comes, unsurprisingly, from so-called “stability fees.” Per the current estimates, the platform is generating nearly $2.7 billion a year via its Ethereum-A collateral vault—that’s roughly $150 million with a flat annual stability fee of 5.5%.

Collateral vaults containing Wrapped Bitcoin and Chainlink tokens as well as ETH-B and ETH-C vaults (which have different risk/reward/fees ratios) and other fees are currently bringing Maker another $46 million per year on average.

As CryptoSlate reported, the DeFi sector has been skyrocketing as a whole since last summer, growing at an exponential rate. As some experts pointed out, the chances are also high that we are currently at the doorstep of a “DeFi summer 2.0.”

A research paper recently published by the Federal Reserve Bank of St. Louis similarly suggested that DeFi has the potential to become a “truly open, transparent, and immutable” infrastructure that can result in a “paradigm shift in the financial industry.”

Maker is a decentralized autonomous organization on the Ethereum blockchain seeking to minimize the price volatility of its own stable token — the Dai — against the IMF’s international currency basket SDR.. Learn more