The second half of 2019 is now upon us. As we all know, 2018 was a terrible year for cryptocurrencies as the market slumped and lost much of its 2017 gains. The market sentiment at the start of this year was evenly divided between cautious optimism and fearful pessimism. However, cryptocurrencies have managed to climb several bullish waves despite the slow start to the year. 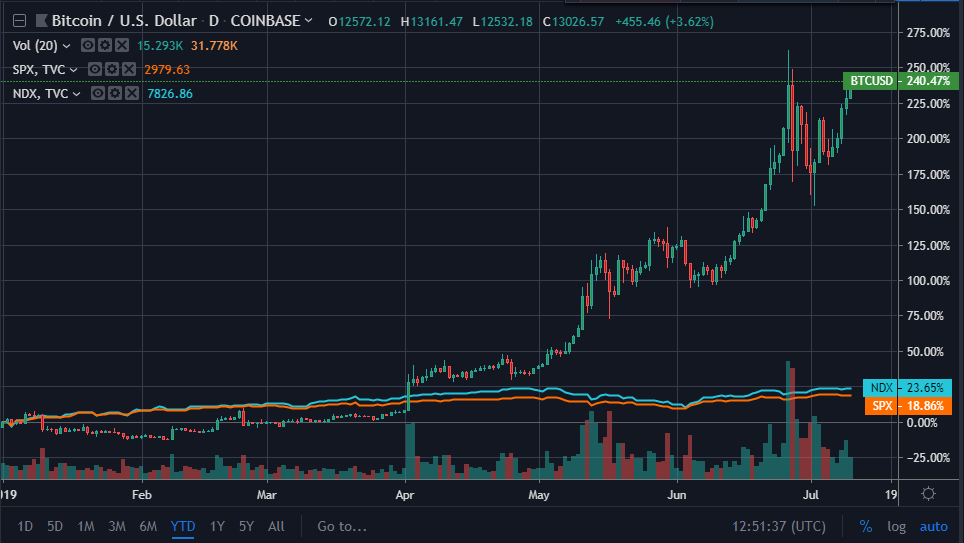 The chart above shows the performance of cryptocurrencies relative to traditional Wall Street equities as represented in the S&P 500 and NASDAQ Composite. The BTC/USD has gained 240 percent in the year-to-date period while the NASDAQ Composite Index and the S&P 500 have only gained 23.65 percent and 18.86 percent respectively in the same period.

In response to the outperformance of cryptocurrencies, some trading platforms such as eToro are now allowing traders to actively build crypto-based portfolios in order to access opportunities in emerging asset classes. This article will provide more insight into the performance of the cryptocurrency market as we prepare to head into the second half of the year.

Cryptocurrencies started 2019 in a depressed state following the general bearish downturn of 2018.  Bitcoin started for the year around $3717.60 and other altcoins were also in a depressed state. However, the euphoria of starting a New Year triggered a 9 percent bullish run in Bitcoin to end the first week at trading around $4,031.09.

Bitcoin’s trading price dropped to its year-to-date low of $3358.83 on February 7 but the market seems to have gotten on a slow but measured uptrend since then. Interestingly, February has always been historically bullish for cryptocurrencies. From 2015, Bitcoin has always ended February with impressive gains and it continued the trend of the fifth straight year in 2019. Bitcoin ended February with a modest 11 percent gain while the market cap of the entire cryptocurrency industry was up 12 percent. 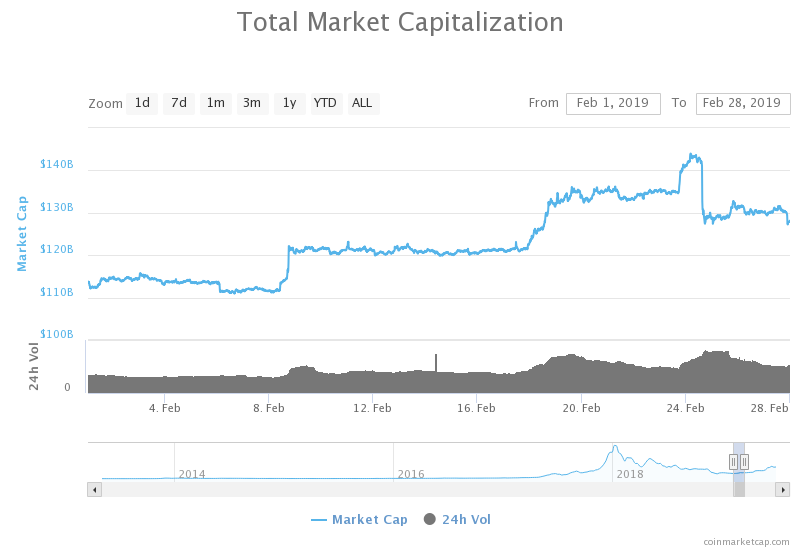 March brought some good news that could potentially hasten the mass-market adoption of cryptocurrencies. In March, Binance introduced Binance Lite, which allows people to purchase Bitcoin with cash in more than 1300 locations in Australia.  Starbucks also announced that its patrons can now pay for their coffee with cryptocurrencies through the Bakkt platform.

The 2019 bullish trend for cryptocurrencies became firmly entrenched in April with the market gaining 16.5 percent to add a massive $24B to its total market capitalization. Bitcoin was at the forefront of the rally after breaking a long-term resistance to cross the $5000 mark. Bitcoin closed for April at $5,333. 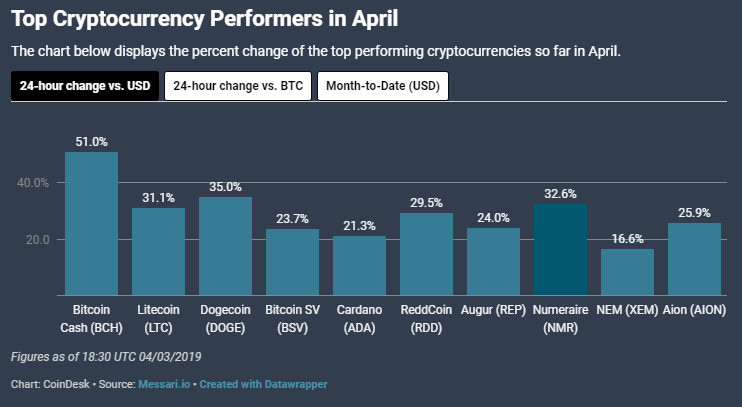 April was a wonderful month for altcoins. Bitcoin Cash was one of the top-performing cryptocurrencies as it soared more than 51 percent from $168 on April 1 to $255 on April 30 – it touched a $317 high in mid-April.  XRP, however, had a poor showing in April after losing the 17 percent it gained during a rally to end the month with a marginal decline.

May was the best month for cryptocurrencies so far in 2019. The total market capitalization of the industry jumped by more than 50 percent after Bitcoin recorded an unhindered rally to cross $9000. In fact, the market cap of the entire crypto industry soared to a 10-month high of $285B before it pulled back slightly.

Ethereum managed to score a place in the list of top gainers as it rallied by more than 60 percent to close the month at $260. Bitcoin Cash also scored a 60 percent gain, Litecoin was up 48 percent, and XRP clawed its way back up with a 37 percent gain.

The cryptocurrency market is trying to consolidate and right now it is uncertain if the market will break out into previous highs or breakdown below the resistance. Many retail traders are also being extra cautious of market momentum that seems to be largely driven by the action of Bitcoin whales. Earlier in June, a whale moved 25,000BTC from an offline wallet to a Coinbase wallet to pull off a $200M trade that triggered a panic selloff.

However, the market is back to “stable” mode and traders are watching the technical indicators for where the market could be headed next. Nonetheless, the news that Facebook will soon be launching a cryptocurrency is already brewing up some undercurrents and it would be interesting to see how the market reacts when more details emerge about how the coin will be used to power developing economies.

Discover the Top Cryptocurrencies to Invest in Today

Start trading on eToro Disclosure: CryptoSlate will earn a small commission when you sign up.

This post was brought to you by eToro, the world’s leading social trading platform, offering a wide array of tools to invest in the capital markets. You can create a portfolio with cryptocurrencies, stocks, commodities, ETFs and more.