This bearish formation spells trouble for XRP; here’s where it may drop to next

XRP surged nearly 16 percent on Jan. 6 as Binance launched perpetual swaps. Despite the upswing, this cryptocurrency lost a significant portion of the gains it made. Now, several technical indicators estimate a steeper correction.

On Jan. 6, the world’s largest cryptocurrency exchange by trading volume Binance announced the introduction of XRP perpetual contracts. The contracts are paired against Tether (USDT) and users can trade it with up to 75x leverage.

Although futures contracts pose an extreme level of risk, they have the potential to generate a massive amount of profits for traders. According to Changpeng Zhao, Binance’s CEO, the high leverage on these contracts offer professional traders an efficient way to trade very quickly, both in terms of cost and performance.

Following the announcement, XRP skyrocketed nearly 16 percent. Meanwhile, Brad Garlinghouse, the CEO of Ripple, addressed the crypto community and investors about a number of concerns that have been raised about XRP over the last year.

In an interview with CNN, Garlinghouse said that Ripple is interested in the success of XRP dismissing the allegations that the company has been “dumping” their holdings.

“Ripple owns a lot of XRP, we’re very interested in the success of XRP, but the accusations of us dumping, that’s not in our best interests to do that. We are clearly interested in a healthy and successful ecosystem. So, we would never do that and in fact, we have taken steps to lock up most of the XRP we own in escrows so we cannot touch it.”

Garlinghouse also highlighted the fact that some financial institutions have bought large amounts of XRP, but they have lock-ups that prevent them from “dumping on the market.” He concluded by addressing the notion of market manipulation stating that “Ripple cannot control the price of XRP.”

Despite the positive sentiment that sparked around this crypto, it plunged nearly 8 percent in the last 15 hours signaling a further decline.

It is worth noting that from a long term perspective XRP seems bullish. The TD sequential indicator is on a red nine candlestick on the 1-week chart, which is a buy signal. This technical index estimates that this cryptocurrency could surge for one to four candlestick or begin a new upward countdown.

Now, it remains to be seen if XRP will indeed suffer a minor correction before continuing the uptrend that can be seen on its 1-week chart. 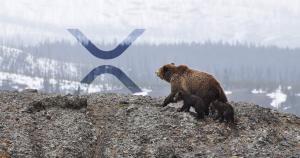 This bearish formation spells trouble for XRP; here’s where it may drop to next

Binance is a global cryptocurrency exchange that provides a platform for trading more than 100 cryptocurrencies. Since early 2018, Binance has been considered one of the biggest cryptocurrency exchange in the world in terms of total trading volume. History CEO Changpeng Zhao had previously founded Fusion Systems in 2005 in Shanghai; the company built high-frequency […] Learn More ➛