Bitcoin continues falling highlighting the dangers of taking a salary in $BTC. 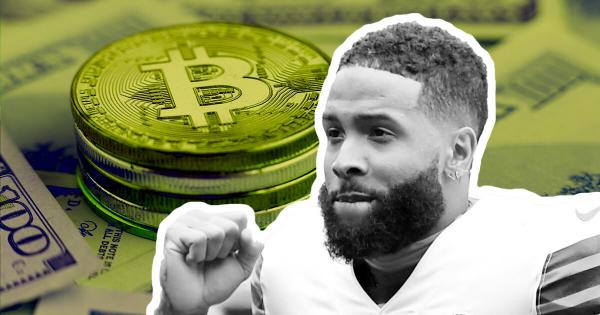 Odell Beckham Jr. is praised by many as instrumental in driving forward the Bitcoin as salary narrative.

Last November, the L.A Rams wide receiver said he would take his salary in Bitcoin as part of a deal with payment provider Cash App.

However, following Bitcoin’s dismal recent performance, financial research firm Hedgeye points out that, in doing so, Beckham Jr. may have slipped up.

Bitcoin continues to tumble on Monday as investors remain spooked by the Fed’s new hawkish stance on monetary policy.

Recently, the U.S central bank signaled its intent to get tough with inflation by raising interest rates and cutting its balance sheet. Some analysts say a rate rise (of significance) would crash the market, while others say the Fed has no other choice.

Fed officials will meet this week with spiraling consumer prices expected to be the front and center topic of discussion. The FT anticipates the Fed will follow through by confirming a rate rise in March.

Since the turn of the year, total crypto outflows have come in at $694.3 billion. Devasting losses over the last week see Curve topping the list with -54% losses, followed by Wonderland and Near.

Bitcoin is faring relatively better with -23% losses in the last seven days. And, as the “crypto God market,” all eyes are on what Bitcoin will do next.

By email, the Head of Market Insights at Genesis, Noelle Acheson, wrote that the Bitcoin Spent Output Profit Ratio, which measures profitability/losses, has been negative for most of this month.

Acheson concluded that hit-and-run investors are exiting, at a loss, to preserve capital.

“Bitcoin’s Spent Output Profit Ratio (SOPR) – which compares sale price to acquisition price – has been in negative territory for almost all of January, indicating that investors are on average selling at a loss. This implies a degree of “capitulation” and hints at the exit from the market of those without long-term conviction.”

Nonetheless, Acheson noted that long-term holders remain strong, as the number of $BTC not moved in a year climbs to 59% of supply.

The dangers of taking a salary in $BTC

The fallout from recent price action highlights the pitfalls of taking a salary in Bitcoin.

If that wasn’t painful enough, Hedgeye states Odell Jr.’s salary will be taxed at $750,000. Meaning, since November, Odell Jr. has netted just $35,703 for his appearances.

Hedgeye took the opportunity to slam being paid in Bitcoin, specifically calling out the Miami Mayor’s talk of paying public employees in $BTC.