Tether, the company behind the biggest stablecoin in the world, has launched Tether Gold, a digital asset providing exposure to physical gold. 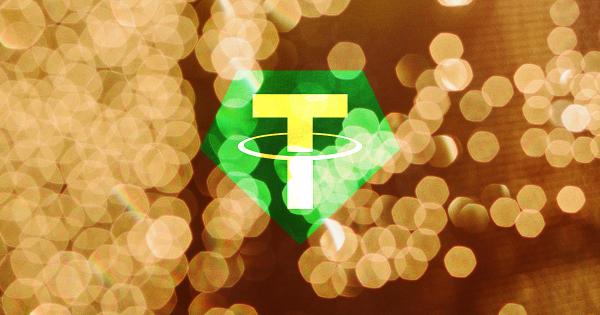 Tether, the company behind the biggest stablecoin in the world, has launched Tether Gold, a digital asset providing exposure to physical gold. According to the company’s announcement, XAU₮ will be available both on Ethereum and on TRON and will represent one troy fine ounce of gold.

Tether will be diversifying into traditional assets, as well. According to a press release shared with CryptoSlate, the company will be launching Tether Gold (XAU₮), a digital asset providing exposure to physical gold (XAU).

The XAU₮ token will represent ownership of one troy fine ounce of physical gold on a specific London Good Delivery gold bar. The company claims the token is the only gold-backed coin that guarantees direct control over the physical gold storage. All XAU₮ tokens will be stored in a vault in Switzerland, guarded with best in class security and anti-threat measures, it said in the announcement.

While no further information on which bank will store the gold bars was released, Tether said that it is the only product among the competition that offers zero custody fees. However, fees will be charged on buying and redeeming tokens.

Tether Gold will be available both as an ERC-20 token on the Ethereum blockchain and as a TRC20 token on the TRON blockchain, the company said. Users can transfer the newly launched coin to any on-chain address from their Tether wallets.

The gold-backed cryptocurrency will be issued by TG Commodities Limited, a U.K.-based company dealing in the wholesale of metals and metal ores.

According to Tether, XAU₮ was launched as an answer to the growing demand for digital exposure to physical gold. Paolo Ardoino, the CTO at Tether, called the launch “a timely innovation in the crypto ecosystem.” He said:

“Tether Gold provides the combined benefits of both physical and digital assets, removing the drawbacks of holding gold in more traditional ways, such as high storage costs and restricted access.”

The Tether Gold website says that holders of XAU₮ will be able to redeem their tokens in the form of physical gold if they have completed the verification process mandated by TG Commodities Limited and hold a “required minimum number of XAU₮.”

However, the token isn’t aimed at the average retail investor. The minimum purchase allowed is 50 XAU₮ or 50 fine troy ounces, which cost around $75,000 at last month’s prices. Fractions of the coin, however, will be soon traded at Bitfinex.