Famous whistleblower Edward Snowden and Polkadot founder Gavin Wood debated on how Web3 can help society to move away from fundamental issues of trust. 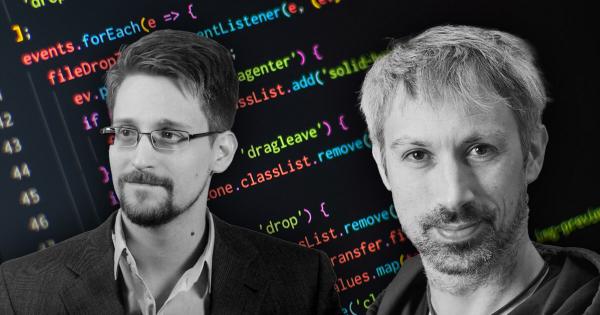 During a historic discussion on the evolution of the decentralized internet at the BlockDown: DeData Conference, Polkadot founder Gavin Wood, who himself coined the term ‘Web3,’ said that Edward Snowden’s revelations helped bring to light the urgency for creating a whole new platform that would “eclipse” the traditional authority based technologies.

Acknowledging that the 2013 revelations prompted the “need for the society to move away from these fundamental issues of trust,” Wood added he considered terming this completely different approach to inter-human interaction on a global level–“Post-Snowden Web.”

Looking 10 or 20 years ahead, Wood hopes the future “massively multi-user application framework”–global services that we broadly refer to as ‘Web’–will provide us with ‘de facto’ guarantees.

“Hard guarantees on the rules that are open and transparent–that we can read, whether it’s in code, whether it’s in English–and a credible belief that they will be followed,” is according to Wood, what was missing in the “pre-blockchain, pre-peer-to-peer world,” which was centered around a trusted authority providing a service.

“It’s gonna be a very interesting social experiment, ” Wood answered when he was asked to predict what Web3 is going to look like in a decade from now.

“We’re gonna see just how much the world cares about privacy, self-sovereignty and transparency, knowing that the rules–the assumptions about how a system or service works–are true.”

Be aware of predatory practices

“We had this beautiful thing–in the internet–that was given to us,” said Snowden.

“But there is a countervailing force that has taken the internet to exploit it–they have accepted it as a gift to themselves–to the exclusion of everyone else,” he added, talking about powerful central forces, whether governmental or corporate.

He observes the same pattern is ”beginning to distort the blockchain space.”

“We see a lot of projects that are being sort of manipulated, or contorted, or shaped, or reshaped–to be, as politely as possible, much fairer to the investors of the project, than they are to the public in general,” added Snowden, calling it–“the corruption of the ideals of the space and what it could be.”

“Over time and with iterations, the common interest will win over selfish interest,” he concluded optimistically.

As he cautioned about pitfalls surrounding the issuance of CBDCs, which he addresses in detail on his Substack, Snowden also warned about possible future implications of projects creating personal identifier databases–referencing Worldcoin.

“Be aware of predatory practices,” cautioned the famous privacy advocate, saying he is mostly concerned about “the first-mover advantage–the network effect–by the market leaders and those who have a lot of resources.”

By voicing his reservations about NFTs in the GameFi sector, he criticized the trend for ​​“injecting an artificial sense of scarcity into a post-scarcity domain.”

“I see them creeping into gaming in a way a lot of people are excited about,” said Snowden, adding that, as someone who has been playing games for a long time, he perceives this as “an inherently anti-social urge.”

Worldcoin wants to scan your eyeballs. But its founder says that’s the ‘future of privacy’