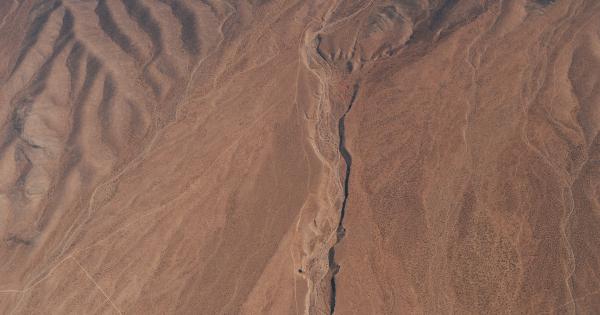 A mysterious “blockchain company” just bought 62 percent of a 162 square mile Industrial park near Reno, Nevada. That’s 67,000 acres. This land has been bought at the Tahoe/Reno Industrial Center, also home of Tesla’s Gigafactory. The Gigafactory is the largest building in the world, with a planned size of 5.8 million square feet (about 100 football fields).

Blockchains LLC’s land size comes to about 3 billion square feet. While no plans have been announced yet as to how the space will be used, we do know that it’s going to be big.

What is BLOCKCHAINS, LLC?

The company seems a bit… mysterious. The website is kind of bare bones, with the just a bit of information explaining what blockchain is, that they are interested in DApps and Ethereum, and that they are expanding. Blockchains LLC is a research group that focuses on Ethereum development. The deal was made for $175 million and was done all in cash.

According to the official Blockchains.com website, the company states that their mission involves:

Our current projects focus on financial services, software development of distributed applications (Dapps) for the Ethereum blockchain, and trusted identity solutions. BLOCKCHAINS serves as a proponent and platform for the next generation of technological disruption—changing the way individuals and businesses transact and interact with one another all across the world.

About the Tahoe/Reno Industrial Park

The Tahoe/Reno Industrial Park (TRI) is a large piece of land just outside of Reno, Nevada. It has become a data hub with companies like Google, Tesla, and now Blockchains LLC moving in. About 100 more companies exist in the park, including Walmart, FedEx, and Switch.

Geographically, it is located in a ideal area, with the I-80 running closeby (a main artery in the USA that runs coast-to-coast), the Union Pacific Rail and the I-5 near as well. It is also just 15 miles from the Reno Int Airport, which has cheap and fast flights to San Fransisco.

Reno’s unemployment rates have been shooting up to almost 12 percent. With this, the city has decided to encourage other types of industry in- mainly with supply chain and data. They have lots of space and a dry climate, making it ideal for data storage and electronics.

Reddit user u/SnowWhiteMemorial, proclaimed resident of Reno, had this to say: 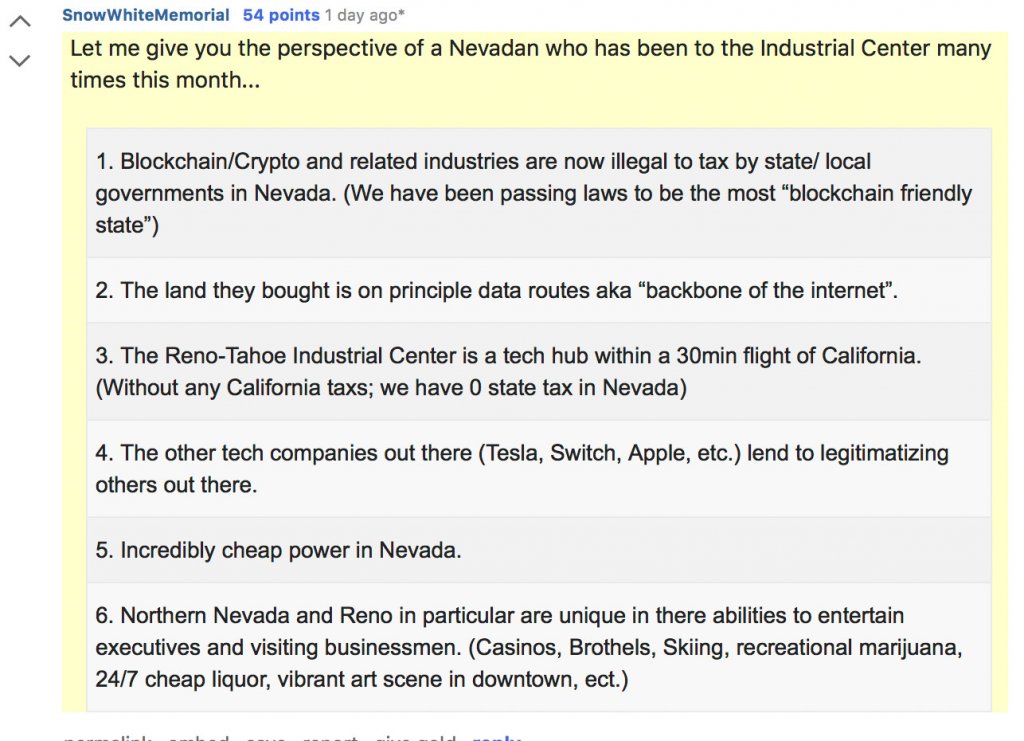 In fact, there has been a data resurgence all over the middle of America. Wyoming has also proclaimed themselves as a “Haven for Blockchain.” Cheap power, cheap land, and large fiber optic cables make the Mid-West a great location for the technology industry.

While there have been no official announcements as to what the land will be used for, some people are already guessing. Could it be a mega-mining rig? Unlikely, but maybe possible. This much land could be a haven to collect energy via renewables and generate cryptocurrencies through mining.

Maybe it’s something bigger? Like a blockchain city. Tesla is there and so is Google. Lance Gilman, one of the owners of TRI, poked at the idea when this story first came out in the “Nevada News Makers.” Here are a few quotes from Gilman in this story:

“It is quite a spread of property. From 15,000 feet (above ground view), I believe they envision a product that will showcase all of the capabilities of the block chain technology.”

“So think in terms of a residential project that would be 4,000 housing units and apartments, along with the shopping .. a full cybernetic community based on the block chain theory and technology.”

“They pick up a huge amount of property along the freeway (Interstate 80) for what I would call freeway-visible retail and that would include everything from hotels, truck stops and restaurants. And again, all with the block chain technology foundation.”

There was once plans in the Tahoe Reno Industrial Park to build “Emerald City.” It never took off, but now with thousands of workers being employed in the park, there may be room for this idea once again. Only time will tell what this mysterious company has in store for this land.