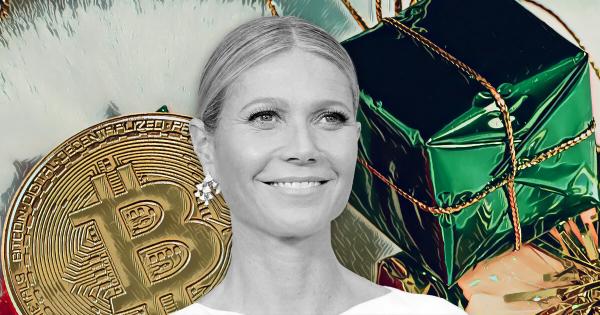 Actress Gwyneth Paltrow has come out to support Bitcoin, saying she wants people to “understand how easy it is.”

Shortly after making that statement, Paltrow announced she is teaming up with payment provider Cash App to giveaway $500,000 in BTC to her social media followers.

Although Paltrow is a somewhat established crypto advocate, having been involved with Abra Wallet since 2017 and more recently investing in Bitcoin mining firm TeraWulf, she is better known as a promoter of health and wellbeing.

With that in mind, should we be concerned that Paltrow is seemingly turning her attention to crypto?

Paltrow and Cash App team up for Bitcoin giveaway

In a tweet on Monday, Paltrow said she intends to democratize participation in the exclusionary crypto space.

This message then transitioned into her Cash App giveaway, which requires following @cashapp and commenting with a cash tag and hashtag for a chance to win. Winners will be chosen at random for prizes of $20 and $100.

“Buying crypto has often felt exclusionary. In order to democratize who can participate, @CashApp is now making it easy to gift Bitcoin. I’m giving out $500k worth of Bitcoin for the holidays. Follow @cashapp + drop your $cashtag below w/ #CashAppGifting to enter.”

Speaking to Elle, Paltrow championed the idea of more women in crypto, saying even though the space seems “macho,” it doesn’t have to be. Especially considering the proportion of households where women are the financial decision-maker.

Strong support was found at the $45,600 level, but a number of false breakouts since the 4th has dropped market sentiment to extreme fear.

A 5% rally today puts Bitcoin at the cusp of breaking the downtrend, but with the rest of Tuesday to come, there’s a possibility that bears will prevail. Nonetheless, market sentiment has improved for Tuesday, moving to fear, off the back of this rally.

With uncertainty ruling at present, the thought of a return to the bear market is at the back of everyone’s mind.

At times like this, many are reminded of Katy Perry’s “crypto claws” Instagram post in January 2018. This was followed by an enduring 34-month long bear market, which saw Bitcoin bottom at $3,700.

While logic dictates the bear market and Katy Perry’s crypto claws post are purely coincidental events, a-listers and crypto are still an unwelcome combination under these circumstances.