The cryptocurrency market is experiencing several drops through established currencies and altcoins alike. 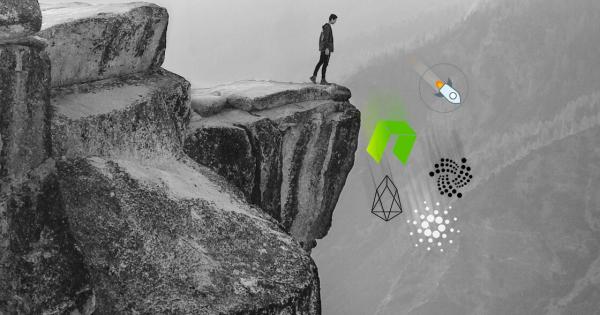 Photo by Leio McLaren on Unsplash

The cryptocurrency market is experiencing several drops through established currencies and altcoins alike. Assets such as Bitcoin (now trading for $500 less than yesterday), Ripple and Litecoin continue to plunge further while seemingly dragging altcoins such as NEO and Stellar Lumens down with them.

XLM has incurred a strong price plunge since our previous article, trading for $0.33 at price time.

Over the last week, Stellar has dropped nearly eight percent and is trading 21 percent lower against the U.S. dollar. Daily trading volume has also fallen from $54 million to approximately $43 million. Also, the currency’s market cap has dropped from $6.75 billion to about $6.35 billion.

Like XLM, Cardano has also incurred a small drop, falling to $0.28 from $0.32 since our previous coverage.

At press time, Cardano is working on several applications, including what’s known as the Plutus core – a smart contract language designed to create new programming languages. There’s also the “Release 0.10.0,” a new type of digital wallet that works to make things safer for users.

By preventing passwords from being opened right away, consumers can create wallets offline and perform transactions without signing in, making them less vulnerable to hackers. Chief Cardano operator Charles Hoskinson is also traveling across the globe to tech conferences, hoping to represent ADA and boost its popularity.

Finally, Korean payments provider Metaps Plus has announced a new partnership with Cardano, which grants the know-your-customer cryptocurrency access to over 40,000 additional consumers and merchants. This could potentially trigger larger adoption and bring its value and price up even further.

NEO has incurred a ten dollar drop since our previous price article, falling from $77 to $67.

At first glance, it appears NEO’s trading signals all appear bearish, and analyst Manoj B. Rawal of FX Street suggests the coin is entering a brief period of “hibernation” before falling deeper into the red.

Rawal blames a newfound lack of enthusiasm amongst traders and shrinking volatility for NEO’s recent turn of events.

EOS has not experienced as strong of a pullback as other altcoins, but it is still falling deeper into the red over the past hour.

FX Street analyst John Isinge suggests that immediate support for the coin lies at $16, while several attempts to break beyond $18 resistance have been thwarted. This may change, however, when the currency launches its main net, expected later this month. The project is garnering positive feedback from financial critics, and some crypto exchanges are already offering their support.

Present support levels may also fall to $15 granted the coin consolidates or is unable to test the $19 range.

NASDAQ investment strategist Kiana Danial feels that IOTA has remained on a solid uptrend since late April and that while further pullbacks may occur in the coming weeks.

The cryptocurrency market cap has fallen to $399 billion at press time, roughly $36 billion less than where it stood just 24 hours ago. Investors are advised to remain wary and trade only what they can afford to lose, as the lengths of current descent patterns are impossible to predict.