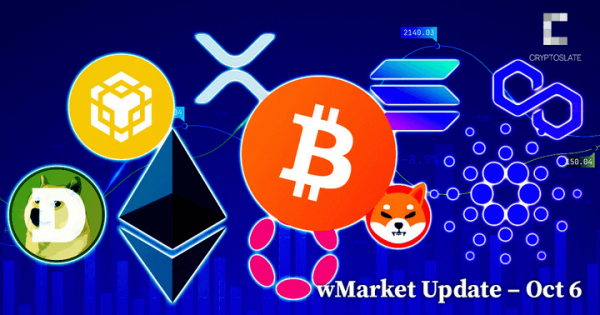 Reversing the trend of the past three days, the cryptocurrency market saw $15.3 billion flow out over the past 24 hours, according to CryptoSlate data. As a result, the total crypto market cap dropped to $956.27 billion as of press time.

Following the lead of Bitcoin and Ethereum, the top ten cryptocurrencies are all in the red over the past 24 hours. Binance’s BNB saw the steepest decline at 3.82% followed by Dogecoin (DOGE), which dropped by 3.53%.

The market cap of USD Coin (USDC) continued its steady downward climb, dropping to $46.15 billion at press time. The market cap of Tether (USDT) and BinanceUSD (BUSD) remained firmly steady during the period at $68.22 billion and $21.04 billion, respectively.

BTC price traded with a downward bias throughout the past 24 hours, struggling to stay above $20,000. At around 20:00 UTC, BTC price finally receded below $20,000, although it recovered slightly around 02:00 UTC, only to fall further down again.

ETH price declined 1.21% over the past 24 hours to trade at around $1,355 at press time. However, the token’s market dominance increased marginally to 17.4% during the period, according to CryptoSlate data.

ETH price saw high volatility over the past day, with several steep dips. However, like Bitcoin, it traded with a downward bias, going as low as $1,350 during the period. The token set a 24-hour high price at $1,370 at around 14:00 UTC.

RVN price increased 4.76% over the past day to trade at around $0.03 as of press time. The token’s market capitalization amounted to $433.76 million.

Crypto lender Celsius filed for bankruptcy in July and is set to auction its assets later this month. FTX founder Sam Bankman-Fried said earlier this week that the firm will pay “fair market value” for Celsius’ assets. But Celsius users may be in for a long wait since the firm’s corporate structure, which was changed earlier this year, prioritizes shareholders over users regarding returning assets in the case of a bankruptcy.

METIS declined 6.45%  over the past day to trade at around $26.38 at press time, eliminating the majority of gains from the previous day. The token’s market cap stood at $115.92 million at the time of writing.

Based on the spirit of Optimistic Rollup, Metis is building an easy-to-use, highly scalable, low-cost, and fully functional Layer 2 framework (Metis Rollup) to fully support the application and business migration from Web 2 to Web 3. Learn More