The average price of non-fungible tokens has dropped by 70% since its recent all-time high, data shows. 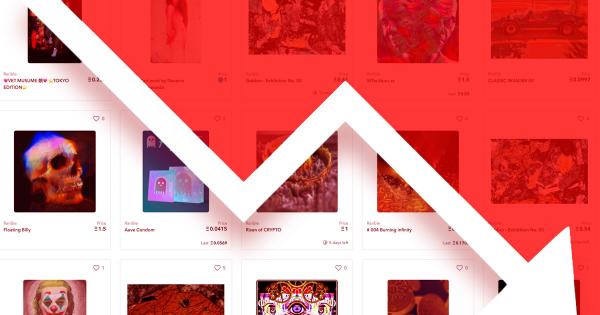 A swift 70% drop in the average price of non-fungible tokens (NFTs) is suggesting that the latest “crypto craze” might be fizzling out—just as fast as it took the world by storm recently, Bloomberg’s experts pointed out yesterday.

According to the data provided by Nonfungible.com, a platform that monitors various NFT marketplaces, the average price of crypto-collectibles peaked at around $4,300 on February 22. However, the market has significantly cooled down since then as the median price dropped to about $1,400 by April 4.

Notably, the all-time high somewhat coincided with the record-breaking sale of “Everydays: The First 5000 Days”—an NFT artwork created by crypto artist Beeple—for over $69 million. Shortly after, the average price of NFTs dropped to as low as $650, although it briefly surged once again to $3,600 on March 11.

Simultaneously,  some experts argued that despite price fluctuations, it is hardly fair to call the NFT market a “bubble.”

Chris Wilmer, an academic at the University of Pittsburgh who also co-edits a blockchain research journal, told the outlet:

“It’s not meaningful to characterize a concept as a financial bubble. NFTs aren’t in a bubble any more than ‘cryptocurrency’ is a bubble. There will be manias and irrational exuberance, but cryptocurrency is clearly here to stay with us for the long term and NFTs probably are too.”

NFTs are for “international crooks and swindlers”

The enormous price of Beeple’s NFT made it the third most expensive piece of art ever sold by a living artist—behind only Jeff Koons and David Hockney. The latter has recently revealed that he is not a fan of digital collectibles, calling them a tool for “international crooks and swindlers.”

In 2018, Hockney sold his physical painting, called “Portrait of an Artist (Pool with Two Figures),” for $90.3 million via Christie’s auction house—the same one that sold Beeple’s artwork recently. During the “Waldy and Bendy’s Adventures in Art” podcast yesterday, Hockney argued that NFTs can easily be “lost” and can’t be compared to actual physical objects.

While his description is quite broad, there is perhaps some merit to Hockney’s concerns. This is because NFTs don’t actually contain the artworks attached to them. In essence, such tokens are just encrypted links to traditional files hosted on a server. And if this server goes down, owners of NFTs wouldn’t even be able to directly access the media files their tokens represent (apart from downloading them from other third-party sources).

Likewise, Hockney wasn’t impressed by Beeple’s record-breaking artwork as well, calling it a collection of “silly little things.” He commented on Beeple’s artwork:

“I saw the pictures, but it just looked like silly little things. I couldn’t make out what it was.”

Meanwhile, blockchain development startup Enjin has recently announced the launch of a whole new decentralized network dedicated specifically to NFTs. Whether it’s a bubble or not, it looks like the technology isn’t going away any time soon.