The title of Satoshi Nakamoto, Bitcoin’s pseudonymous creator(s), is in contention for the umpteenth time. This time around, a German entrepreneur and former DJ going by “Jörg Molt” has laid claim to the Nakamoto name, telling attendees to a crypto industry event that he is co-creator of Bitcoin and owns 250,000 coins.

The clout of Satoshi

Satoshi Nakamoto’s name carries a lot of clout. The pseudonymous coder (or coders), after all, created a decentralized network that was and still is revolutionary, acting as both an ultra-secure transaction settlement layer and as a form of scarce and non-sovereign digital money; Bitcoin solved the barriers that previous attempts at non-sovereign digital money failed to jump over. What’s more, estimates from industry research groups suggest that those behind the Nakamoto name own a stash of coins valued at well over $5 billion.

It should come as no surprise then that many have tried to claim ownership of the mystique of Nakamoto after the Bitcoin creator suddenly fell off the map, abdicating leadership of the then-nascent project to an early adopter.

The thing is, all of the claimants to the Satoshi Nakamoto name have failed to decisively prove that they are a co-creator or the creator of Bitcoin, providing often flimsy evidence and utilizing some form of mental gymnastics to try and convince the world of their legitimacy. By and large, these attempts haven’t worked.

But this hasn’t stopped people from trying their hand at becoming Satoshi.

In attendance were a cast of individuals—you had your Bitcoin maximalists, altcoin shills, blockchain entrepreneurs, cryptocurrency “influencers,” and the like—but also, you had Jörg Molt, whose Twitter handle is “@bitcoin_cofound” and Twitter biography reads “co-founder of BitCoin”—the handle has recently been deactivated. Molt has claimed to own 250,000 BTC, worth around $2.3 billion at the current Bitcoin price of $9,300.

While Molt seemingly flew under the radar for most of the conference, Kenneth Bosak, a prominent cryptocurrency commentator, decided to take action on Oct. 31st.

On that day, Bosak posted a video of him confronting Molt, calling him a “scammer” and attempting to profile him at one of the events of the week, World Crypto Con. (This is Bosak’s second attempt to raise awareness about a “scammer” at an industry event. He previously was escorted out of Consensus in New York for calling out a cryptocurrency project’s founder.) 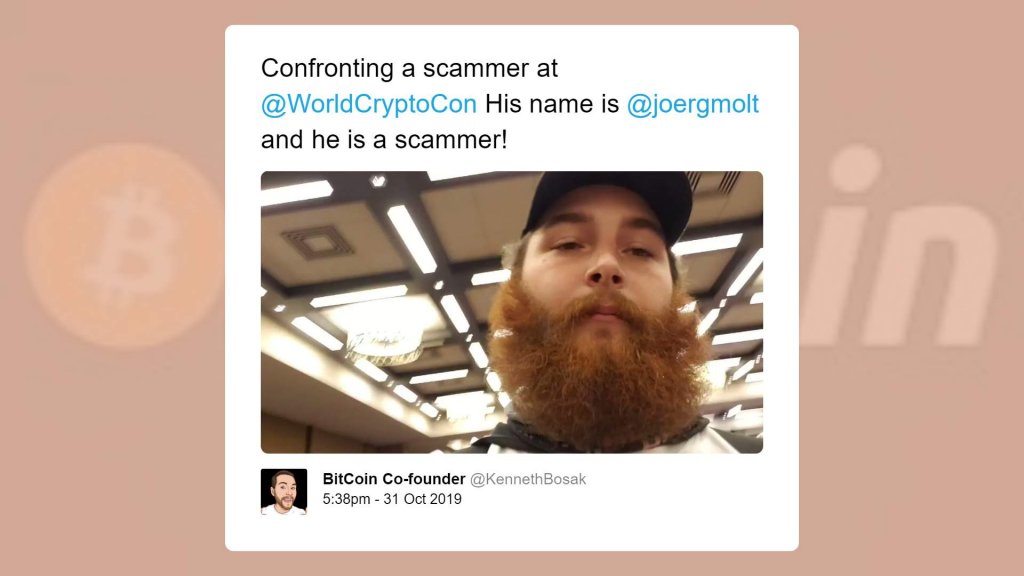 Andreas Antonopoulos, a prominent Bitcoin educator known for being one of the nicest people in the industry, lambasted Molt in an extensive Twitter thread. Antonopoulos wrote:

“I have heard from others that he claims to be the founder of Bitcoin and has thousands of BTC. A LIE.”

Others were quick to follow suit. Lina Seiche, the Global Marketing Director of crypto exchange BTSE, posted a synopsis of a video posted by one of Molt’s purported ex-wives. According to Seiche’s translation of the six-minute YouTube video, the ex-wife said that Molt is a debtor to at least six people, is not paying alimony for their two kids, and didn’t even own a computer when Bitcoin’s whitepaper was released 11 years ago.

Molt, who has disappeared off the web in the wake of Bosak’s video, has yet to respond to the accusations.

This odd debacle comes at a weird time in the whole Satoshi timeline.

As Samson Mow, the CSO of Bitcoin development firm Blockstream, remarked, Molt’s little run-in with Bosak comes as Craig Wright, the Australian cryptographer that has also claimed to be a creator of Bitcoin, failed to pay Ira Kleiman, the brother of an early Bitcoin adopter wrapped up in more Satoshi claimant disputes, hundreds of thousands of Satoshi’s coins. 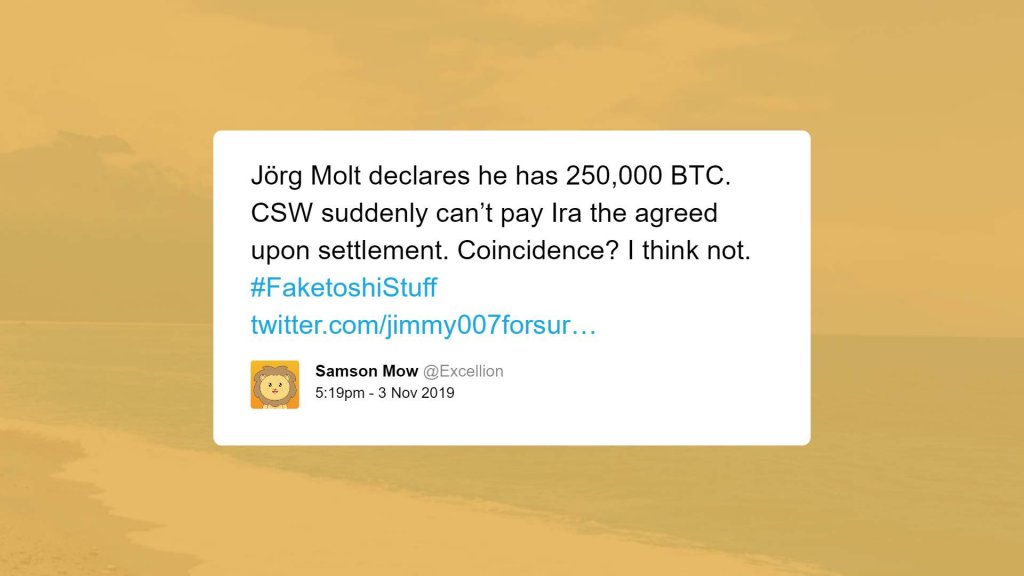 Craig Wright has pulled out of the settlement with the Kleiman estate, claiming he was unable to finance the 500,000 BTC payoff.

Bitcoin, the world’s first and largest cryptocurrency, might have celebrated its 10th birthday in January this year, but it was 11 years ago today that it was introduced to the world.

There is another claimant to the Satoshi Nakamoto throne.

With the current DeFi locked amount crossing over $2 billion, doubling in a month, it’s imperative to discuss yield farming as it pulled the trigger for the explosive movement of DeFi.