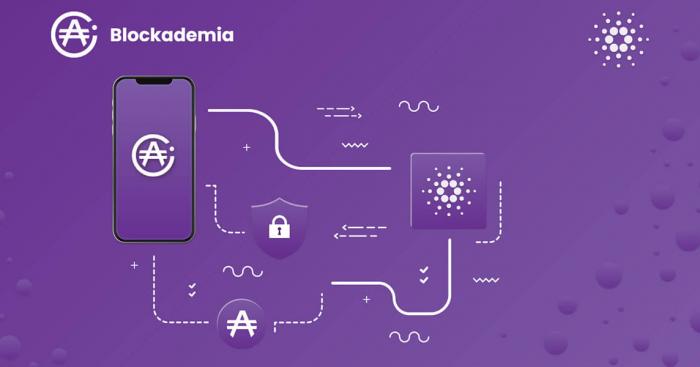 “Let’s shape the world with truth!” is the motto of Blockademia, a Croatian crypto startup which aims to end the issue of falsified documents. Blockademia introduces a decentralized information system that is based on the Cardano blockchain and will allow issuing and checking the authenticity of documents and certificates issued by educational institutions, city, regional and state offices, insurance, pharmaceutical companies, and any other document issuers that need protection from forgery.

Originality and authenticity of issued documents will be verified via Blockademia dApp, a core web application that will differentiate two entities: document publisher and document checker. Blockademia has a dual-layer structure where the processes of document issuing and all user processes are executed in an isolated part of the application and the blockchain interaction in another part, thus achieving cost optimization of the system.

‘’Issuer uses the web GUI to enter necessary data to create the document, and the system uses that data to generate a unique hash that is being written to the blockchain as transaction metadata. System only considers data uploaded via the Blockademia interface, thus protecting itself from duplicating entries to the blockchain. Data entry can be per single document or multiple documents to be issued, and the Issuer needs to own ACI tokens to enter data and issue the document to blockchain,” explains Marin Kramarić, CEO of Blockademia.

The Issuer then has access to the administrator interface where they have an overview of their prepaid Cardano address, which contains the necessary amount of ACI tokens for issuing. The entry interface enables single or multiple document data entries. When the issuer enters the data and confirms it, the dApp charges the fee in ACI tokens and writes access to the blockchain. After the blockchain entry is added, the Issuer receives a QR code for each individual document which can be used later for simple verification of the issued document.

Verifying the authenticity of a document is done through the web interface or Android/iOS Blockademia dApp. Verifier enters the data required for the verification through the interface or scans the generated QR code. The basic version of the dApp allows free verification of documents one by one, while business and enterprise verifiers will be able to choose between advanced options in the corporate version of the application.

Blockademia, which has a referral program,  is currently in the community sale, which lasts until December 6. The Croatian startup plans to raise as much as 21 million euros and the funds raised will be used for the further development and global expansion of the Blockademia system worldwide.

“Blockademia’s system is completely transparent and prevents any manipulation, which is why we firmly believe that Blockademia can put an end to issues of document falsification. I invite potential investors to join us in creating a new level of authenticity,” concluded the CEO of Blockademia.

To raise funds for further development, Blockademia plans to issue 85 million ACI tokens, out of  250 million. The initial distribution of ACI tokens is carried out through its own web system in the form of free distribution through the referral system and the sale of tokens.

Blockademia plans to use the funds raised to further strengthen the team to have a franchise network and customers around the world in 18 months. In the first two quarters of next year, the goal is to complete the Blockademia dAapp and test it with the first users. In the Q3 of 2022, the plan is to complete the web and mobile app for verification, and finally, in the Q4 of 2022, and they plan to be on the mainnet.

Join us in creating a new level of authenticity!