Canadian authorities have only managed to freeze 30% of the roughly $1 million in crypto donations made to the Freedom Convoy as of March 18th. 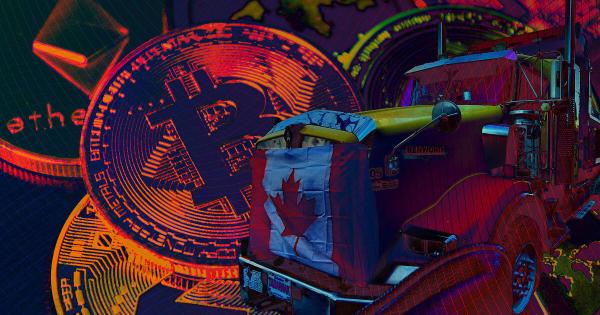 Canadian authorities have only managed to seize roughly 30% of the 20.7 Bitcoin donated to support the Freedom Convoy protest, which came to an end almost a month ago.

A joint task force comprising the Ottawa Police Service (OPS), Ontario Provincial Police (OPP), and RCMP is in charge of recovering the donated crypto but has been struggling to chase it down. In February, a Canadian court ordered various crypto exchanges and wallets to freeze the “accounts” of those involved in the protests, however, one of the crypto wallet providers said it could not do so with non-custodial wallets.

As of March 18th, authorities have only managed to freeze 5.96405398 bitcoins and are struggling to freeze the rest of them as the coins have been split and transferred to hundreds of other virtual wallets, according to a CBC News investigation.

Where is the money?

“I presume, although I don’t know, in part that was done in order to distribute the wallets … they’ve taken one big wallet, moved it into hundreds of smaller wallets, and then they hand the passwords to that smaller wallet to the ultimate recipient.”

It is assumed that the bitcoin is being handed out to people involved in the protest via hand-to-hand transfers of seed phrases but without evidence, it remains somewhere in the realm of speculation. Ultimately, it is uncertain who the donations are going to and how they are using them.

Meanwhile, the RCMP said in a statement sent to CBC News that it is fully capable of seizing digital assets and pointed to past accomplishments in prosecuting crypto criminals as assurance.

They began organizing convoys — under the moniker “Freedom Convoy 2022” — across the country on January 22 and converged on downtown Ottawa on January 29th to form a blockade. The protests lasted almost a month and began garnering financial support via crowdfunding platforms, which were quickly shut down. Following that, the movement began receiving donations in crypto, mainly Bitcoin.

This forced the Canadian government to make an unprecedented move in invoking the Emergencies Act to give the state more power to crackdown against the protests and to create new provisions in money-laundering rules against crypto and crowdfunding. The protests came to an end at the end of February but protestors remain dissatisfied.