Floki Inu will become the first advert on Burj Khalifa to use the word “cryptocurrency.” 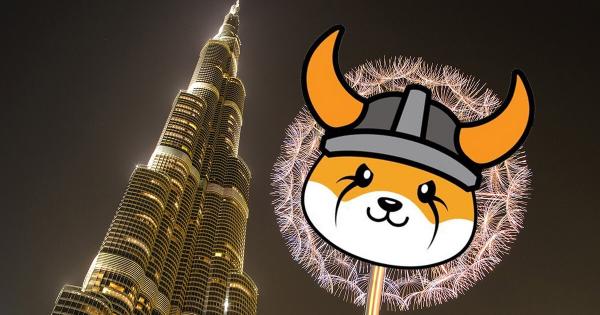 The team behind Floki Inu would leave no stone unturned in their bid to make sure that the meme coin and the crypto industry entirely is registered in the consciousness of the people of the world.

Their latest marketing effort would see the Elon Musk’s Shiba Inu dog-inspired project being promoted on the tallest building in the globe, Burj Khalifa.

According to a tweet made via the official Twitter handle of the crypto asset, the meme coin will be displayed on the historic Burj Khalifa building on the 3rd of December, 2021 by 8:40PM Dubai time/4:40PM UTC.

#FLOKI LOCKS DOWN THE BURJ KHALIFA

In what will be a landmark campaign symbolic of our strategic intent to dominate the Middle East, $FLOKI will have a massive display on the Burj Khalifa on the 3rd of December, 2021 – at 8:40PM Dubai time/4:40PM UTC. pic.twitter.com/y9090nbt7s

It continued that the display has been planned to coincide with the United Arab Emirates’ main National Day Celebrations which is when the building usually tends to get reserved for official, government, and royal family celebrations in the Middle Eastern country.

This way, the project would be getting a new level of exposure and it could draw the interest of the high and mighty to the project. Notably, Floki Inu would also become the first ad on the 2,722-feet tall skyscraper to use the word “cryptocurrency.”

Per the team, the advertisement would further cement the legacy of the crypto asset as a project to reckon with and at the same time, further legitimizes it in the face of the crypto community.

While this new stunt appears to be the most daunting pulled by the Floki Inu’s marketing team yet, the project has had a number of other mouthwatering marketing activities in this year alone.

Just recently, we reported that the meme coin signed a deal with Italian Serie A side Napoli to display its logo on the back of the club’s jersey till the end of the season. Its logo can also be found on Indian Super League’s Kerala Blasters and the Spanish LaLiga’s Cádiz.

Apart from its sporting marketing activities, the coin has also had an appearance on the London Underground transportation system where it drew the consternation of the authorities.

Floki Shiba is cute but with a lot of BITE! $FSHIB is a deflationary coin designed to become more scarce over time. Learn more