Stephen Harper sees Bitcoin alongside gold and the US dollar as a viable global reserve asset. 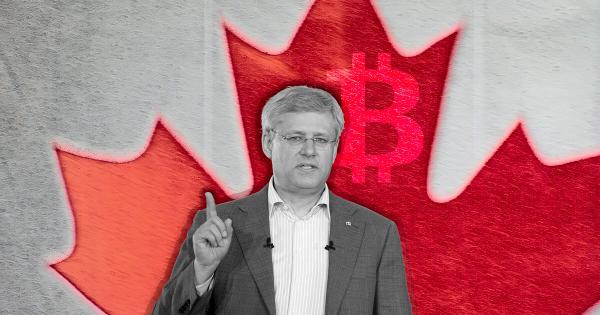 Stephen Harper sees Bitcoin alongside gold and the US dollar as a viable global reserve asset.

Bitcoin to the moon

Bitcoin proponents must be so excited after a blockbuster year. The asset saw widespread adoption by investment funds, traditional finance participants, family offices, and tech funds, and set new all-time highs in December, a figure that was over 100% higher than its previous value.

Now, there’s a new evangelist on the block, and it’s the former Canadian prime minister Stephen Harper. In an interview with Jay Martin, president of investment service Cambridge House, at the Vancouver Resource Investment Conference on Sunday, Harper said that Bitcoin was fit to be counted along with other hard assets like gold.

"We've seen the US dollar trend down in recent months…unless the US becomes a catastrophe, it's hard to see what the alternative is to the USD as the world's major reserve currency. Other than gold, #bitcoin, a whole basket of things… pic.twitter.com/E5atb4qRDf

However, this didn’t mean that the US dollar was losing its prominence anytime soon. “Other than gold, [and] Bitcoin…I think you’ll see the number of things that people use as reserves will expand, but the U.S. dollar will still be the bulk of it,” Harper stated, when asked about the current state of the global financial market and which assets could make it to “reserve” status.

“It’s hard to see what the alternative is to the U.S. dollar as the world’s major reserve currency,”  he noted.

Not a CBDC bull

Harper has likely seen all of Bitcoin, at least information wise. He was the Canadian prime minister from 2006 to 2015, witnessing the asset’s inception, growth, first bubble, and eventual recovery in his term.

His comments for Bitcoin as a reserve asset came in favor of the Chinese yuan or the European unified currency Euro, stating that the former was subject to high levels of administrative restrictions while the latter faced long-term uncertainty.

Meanwhile, Harper added that central bank digital currencies (CBDCs) were an experiment that was “inevitable” but faced a difficult challenge in terms of governance, enforcement, and long-term viability.

Harper, however, added that if CBDCs were released as part of a series of “wild experiments to the role of central banking” it would worry him “a lot.”

Politicians waking up to crypto

Just last week, Miami mayor Francis Suarez announced that he was considering buying Bitcoin for the city’s treasure, becoming one of the first US politicians to speak positively about cryptocurrencies and the formal use of Bitcoin in a hard asset setting.

He said such a purchase could make the city of Miami one of the most crypto-forward and technologically advanced cities, adding that the hypothetical reserves could have already been “200 percent higher” had he taken the decision to invest earlier last year.

Suarez further stated that he was even looking into allowing citizens to pay taxes and fees to the city in Bitcoin, a move that would make it “the easiest place in the United States to do business if you’re doing it in cryptocurrencies.”