With its record-breaking bull run, Bitcoin stole the public spotlight from the equally explosive DeFi. 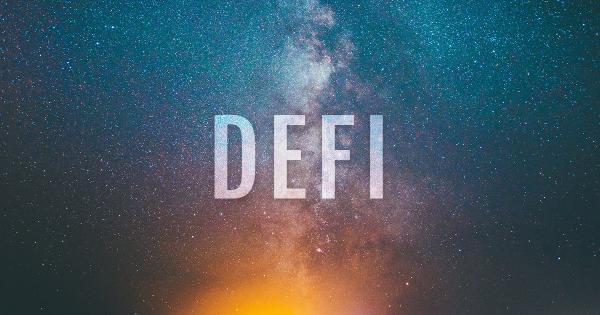 Photo by Aperture Vintage on Unsplash

With its record-breaking bull run, Bitcoin stole the public spotlight from the equally explosive DeFi. To be sure, Bitcoin represents a simpler affair compared to DeFi’s cyberbanking, but it too has just started to grow out of its birthing pains.

2020 had many peculiarities. Mostly, they were negative, but some were positive. For cryptocurrency enthusiasts, the year ended up yielding big gains with Bitcoin’s ongoing bull run. However, the rapid growth of DeFi—decentralized finance—is not just a mere exercise in mimicking gold. For the first time in human monetary history, DeFi made it possible to gain access to age-old financial products—lending and borrowing—without the meddling of banks or governments.

All you have to do is tether your crypto wallet to a DeFi network and start reaping the gains in the form of high-interest rates, referred to as yield farming. This newly opened opportunity to make a quick buck caused a frenzy of activity as we have never seen before. In a short span of a few months, DeFi’s growth went through the roof.

Although DeFi’s total value locked (TVL) made its first $1 billion milestone in February, the Summer period saw its explosive growth. In a period of seven months, from June 2020 to January 2021, DeFi grew from $1.01 billion to over $25 billion as of January 19:

Less jaded and cynical crypto users saw this coming. Although it is tempting to frame this awesome growth as a bubble reminiscent of the ICO craze, with its many fraudulent and empty whitepaper projects, DeFi is its own thing. Bitcoin (BTC), Ethereum (ETH), and other cryptocurrencies laid the groundwork for transforming our perspective on the meaning of money. Underpinned by the internet and powered by blockchain, cryptocurrencies have value because they are not under the auspices of central bodies, left to be manipulated as central banks see fit.

Instead, cryptocurrencies derive the value of trust from more formidable sources: math, cryptography, blockchain, and peer-to-peer (P2P) technology. As such, unimpeded by national borders and calcified monetary mechanisms, Bitcoin is being adopted as a haven amid failed monetary systems.

From Argentina and Venezuela to Lebanon and Iran, it is becoming as much as digital gold as it is a form of payment. Popular small business accounting software Freshbooks even lists Bitcoin as a payment method that businesses should consider.

To add to the noise, one of the world’s largest banks, JPMorgan Chase, bailed out during the 2008-2009 financial crisis, projects that Bitcoin is headed toward replacing physical gold as a store of value. Bitcoin’s accessibility has largely increased as well, with investing platforms like eToro now offering cryptocurrency access to U.S. traders.

Separating the Wheat from the Chaff

A glance at DeFi’s growth curve in such a short span can easily mislead someone to think of it as a bubble. In some sense this is true, but not in the sense that matters in the long run. When we talk about a bubble—a rapid rise of market value driven by exuberant behavior—we have to view it in terms of maturation stages.

DeFi is still in the early maturation stage. We can see this by the overvalued and often memetic governance tokens. These tokens were developed and employed by blockchain developers to give people a tool to shape the protocol platform, vetting, and voting on new features via Ethereum’s smart contracts. Such ecosystems are also called decentralized autonomous organizations (DAOs).

Within the first months of the DeFi Yield Farming craze, the Compound platform with its COMP token rose 300% in value, only to halve in value a month later.

Likewise, Yearn.finance, with its five-part ecosystem of lending, borrowing, stablecoins, exchange, and Aave capital clearance, yielded exorbitant 35,000% returns to the very first wave of adopters. Again, we are seeing a bubble curve—spike and burst.

However, with both of the Compound and Yearn.finance examples, we see a stabilization period, just like we have seen with countless altcoins. Only those DeFi platforms that offer value rise to the top. With the DeFi space, such value is far more tangible than the previous era of thousands of altcoins uselessly vying to dethrone Bitcoin while offering nothing extra in return.

On the other hand, DeFi platforms are explicit in the value they provide:

Moreover, silly memetics also mirror the period when altcoins entered the spotlight and just as quickly vanished from the scene. Just as there was Dogecoin (DOGE), so is there SushiSwap (SUSHI) in the DeFi space, a brainchild of ‘Chef Nomi’ who became a multi-millionaire by cloning Uniswap’s code.

For this reason, sidechains such as Liquid, Stacks, and RSK provide a hybrid solution where smart contracts are layered on top of Bitcoin’s blockchain. They have yet to gain major traction. In the meantime, tokenization of Bitcoin in the form of Wrapped Bitcoin (WBTC) is the most popular solution for Bitcoin holders to enter the DeFi space dominated by Ethereum.

DeFi’s Momentum Has Been Reached

Outside of lingering meme tokens and bloated protocols created for a quick buck, the DeFi space also has to deal with hacking issues. According to a recent CipherTrace report, hacks in the blockchain space declined by $1.8 billion compared to the previous year. However, DeFi hacks increased, presently accounting for 20% of all hacks in the crypto ecosystem. Just as it happened with cryptocurrencies and crypto exchanges, DeFi now enters the stage of solidification and fortification, by employing code auditing services and insurance policies.

At the same time, the Federal Reserve makes sure interest rates remain near zero, a policy that is then followed by all other traditional banks, creating a demand for a parallel financial ecosystem.

Even with all the immaturity baggage, DeFi has what it takes to respond to such a demand. As we previously noted with the trend of more and more people viewing Bitcoin as digital gold, this means that the hodler trend is also increasing. Hodlers don’t care about selling off Bitcoin, but holding it and buying it more. In turn, this creates a sizable pool of digital assets just waiting to be harnessed by DeFi platforms, especially now with the undergoing upgrade to Ethereum 2.0 which will drastically broaden the blockchain’s throughput.

For people seeking greater security, DeFi’s momentum is spilling over into a hybrid CeFi. For example, BlockFi offers up to 8.6% APY (annual percentage yield), which is unheard of even for tax-exempt savings accounts. It’s even possible to receive a higher APY on DeFi networks, but BlockFi offers a grade of protection people are accustomed to in the traditional world of finance.

Lastly, DeFi has an enormous space to expand into. In addition to record-low interest rates, 31% of the world’s adult population remains unbanked. Even in the economic powerhouse, the United States, 55 million Americans have no access to banking services. Regardless if one lives in a developed or undeveloped world, internet access is now all it takes to take advantage of both DeFi and CeFi.