Exchange flow metrics show an overall decline in both inflows and outflows, with inflows — or profit taking — seeing the biggest drop off. 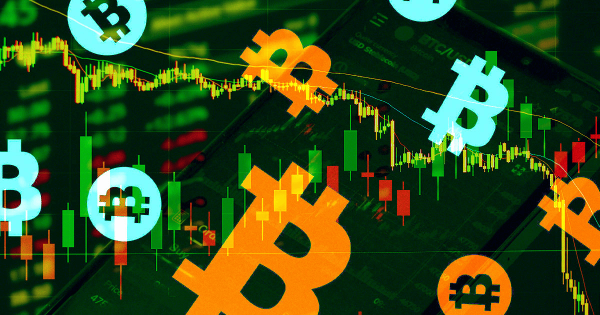 Both inflows and outflows have tapered off significantly from November 2021 market highs, with inflows seeing the most significant change by sinking to multi-year lows.

Exchange inflow and outflow show the total amount of Bitcoin transferred to and from exchange wallets in USD. The chart below shows that over a 30-day moving average, inflows have exceeded outflows consistently since mid-2017. This is expected behavior in a bull cycle as smart money holders send BTC to exchanges to cash out profits.

Since the November 2020 market top, this disparity has been particularly noticeable, with inflows significantly outpacing outflows culminating in a June 2021 peak of approximately $6 billion.

However, since that peak, inflows have markedly dropped off, matching covid crash levels seen in July 2020.

Heatmaps show a breakdown of the total transfer volume sent to and withdrawn from exchanges in USD.

The left y-axis represents the size of individual transaction volume in USD. The color represents the number of transactions in each of the 100 volume buckets. At the same time, the right y-axis shows the Bitcoin price in USD on a logarithmic scale. Along the bottom x-axis is time.

The chart below shows high inflow volume occurring during the December 2017 previous bull cycle peak. Similarly, this pattern played out during Bitcoin’s double top, when its price hit $64,000 and $69,000 in March 2021 and November 2021, respectively.

Taken in conjunction with previous observations, this suggests that short-term holders bought Bitcoin heavily during both bull cycle peaks while long-term holders were selling at the top.