Speculation mounts on McCaleb's reasons for not selling his stash of XRP tokens. 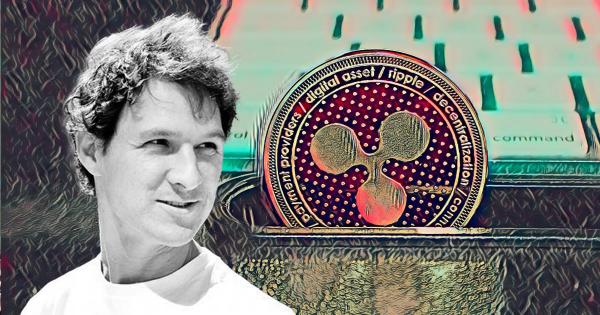 According to the website jed.tequ.dev, Ripple co-founder Jeb McCaleb hasn’t sold any XRP since the end of August this year. Making this one of the most prolonged periods in which he hasn’t offloaded his holdings.

The data shows the last sale took place 12 weeks ago, where he transferred just under eight and half million XRP to Bitstamp to sell.

What’s the story with XRP dumping?

Jeb McCaleb is a prominent figure in the crypto industry, having co-founded Ripple in 2011 while also creating the Mt. Gox exchange.

McCaleb was Ripple’s first-ever CTO, but disagreements with fellow co-founders saw him leave in 2013. It’s reported that inappropriate relations with a Ripple Labs employee, Ms. Kim, and her subsequently leaving caused a rift in which he lost interest in building up the firm.

In a blog post dated October 2017, current Ripple CTO David Schwartz reframed the situation, saying McCaleb had unjustifiably betrayed his workforce and investors. Adding that, in situations of betrayal, it’s not unusual for founders to be forced out.

“IMO, there is simply no justification for betraying your employees and investors except if you are aware of illegal or immoral actions on the part of the company or its management. Jed’s claim now is that he was badly treated.”

Nonetheless, at the time of leaving, McCaleb owned 9 billion XRP, and rather than rubberstamp letting him leave with unrestricted access to the lot, Ripple negotiated a deal stipulating the amount he could sell to prevent massive oversupply.

After allegedly breaking that deal in 2016, a new agreement was renegotiated in which he would donate 2 billion XRP to charity, and the remaining 5.3 billion would be placed in Ripple custody with rules on how much he can sell (if he chooses to) based on a percentage of average daily volume.

No tokens sold in over three weeks

Since his last transfer out on August 31, McCaleb hasn’t sold any XRP, leading to speculation on his current reasons for not selling.

XRP’s performance since September 1 has been somewhat stagnant. Between then and now, a peak price of $1.39 was achieved on September 6. Since then, a downtrend saw the price bottom at $0.87 some two weeks later.

While a series of higher lows has given hope of a revival, the past week has seen XRP caught in a tight trading range between $1.02 and $1.10.

Jed McCaleb’s ‘Tacostand’ funding wallet now has zero XRP remaining. What does it mean for Ripple?