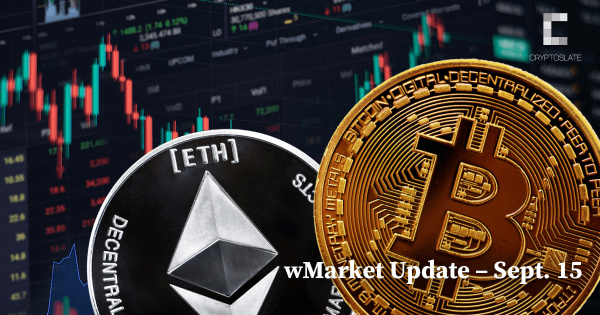 The total cryptocurrency market cap saw net outflows totaling $21.76 billion from the previous day. As of press time, it stood at $962.51 billion, down 2% over the last 24 hours.

Over the last 24 hours, all the top 10 cryptocurrencies except for Cardano saw sell-offs, with Ethereum posting the most significant losses, falling 8%.

Following a significant sell-off due to the higher-than-expected U.S. CPI inflation data released on Sept. 13, Bitcoin continues to trade within a tight range, with today’s channel fluctuating between $19,600 and $19,900.

There were no immediate changes in the ETH price following the Merge, which took place on September 15. However, a sell-off occurred during the late afternoon (UTC), leading to a bottoming at $1,460. A recovery saw bulls tap out at $1,520, triggering a slow bleed lower.

VGX leads the top gainers over the reporting period, trading around $0.79517 as of press time — up 17% over the past 24 hours. Takeover rumors continue to circulate for the bankrupt lender  Its market cap stood at $221.44 million.

CHZ continues climbing higher, recording 8% gains over the past 24 hours to trade at around $0.20054 at press time. There have been no new significant developments with the project, it’s likely demand is rising as the new football season takes hold and excitement builds for the World Cup, due to start November 18. The token’s market cap stood at $1.2 billion.

LUNC is up 2.3% since the last wMarket update to trade at $0.00029 at press time. The token has lost 45% in value over the last 30 days due to renewed interest by Korean authorities to bring Do Kwon to task. Its market cap stood at $1.78 billion at the time of writing.

CEL is today’s biggest loser falling 23% over the past 24 hours to trade at around $1.76659 as of press time. The CeFi platform recently announced plans to relaunch and specialize in crypto custody solutions. There have been no updates on when customers will have their funds returned. Its market cap stood at $421.97 million.

Voxels is a platform that allows players can buy land, build on it, customize their avatar with wearable NFTs and more!. Learn More

Conflux Network is an open protocol for a new world of DApps, finance, and Web 3. Learn More

Rendertoken is a decentralized economy of 3D assets utilizing the global network of GPU devices through its cloud rendering technology.. Learn More